Here’s my second Ms. Sparkle polish. The first one was Come on Eileen (click here to see it if you missed the post)
Rock the Casbah is a dear sister to Come on Eileen and is also a Facebook group custom from January 2017.

I didn’t take any chances with the application today so I started out with a layer of black underwear for her. Then two easy coats of Rock the Casbah – and the drying time was okay.

I stuck a butterfly sticker on my ring finger and topped it all with a layer of topcoat.

Here’s what she looks like. Two coats over black + a layer of topcoat. 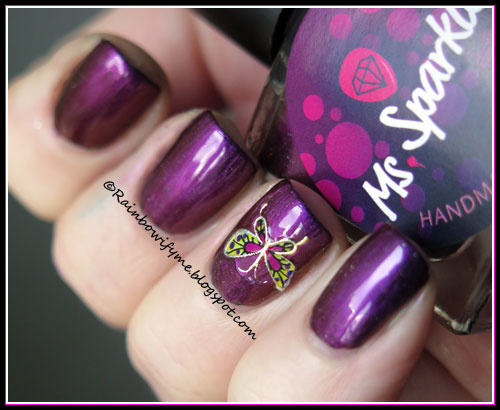 Look at the shift here! I really dig the red it shifts into. 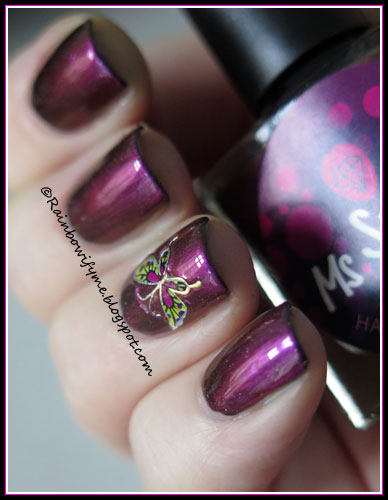 I took quite a lot of pictures of it. 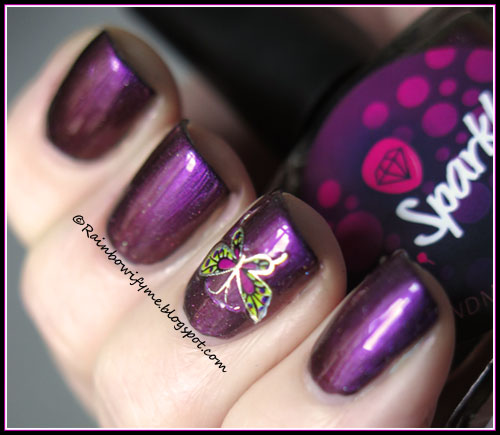 Here’s the last one, just because I like it. 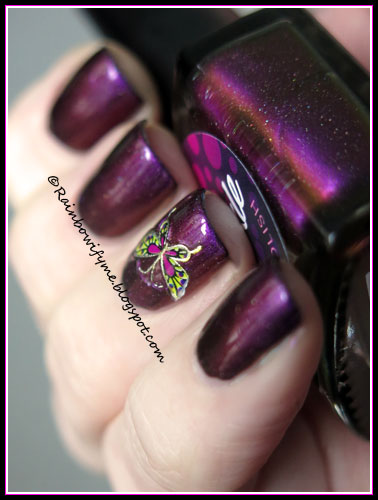 There is one last sister, which I’m going to show you soon.
The polish was limited edition and is no longer available.

Number of coats: 2 over black or 3 on its own
Drying time: Okay
Finish: Duochrome with shimmer
Overall impression: This is way more my colour than the first one. I like it.
Buy again: Yes
Posted by Rainbowify Me at 6:00 AM 11 comments:

Today I’m going to show you something very unusual on this blog: A sheer baby blue polish. I would never have bought this polish had I seen it in a shop, but I received it in a grab bag and you know the rule: No polish leaves the house without having been tried on.

The polish is sheer. I used three coats for my mani, but I should have used at least one more for full coverage. The drying time was average.

Here’s what three coats and a layer of topcoat looks like: 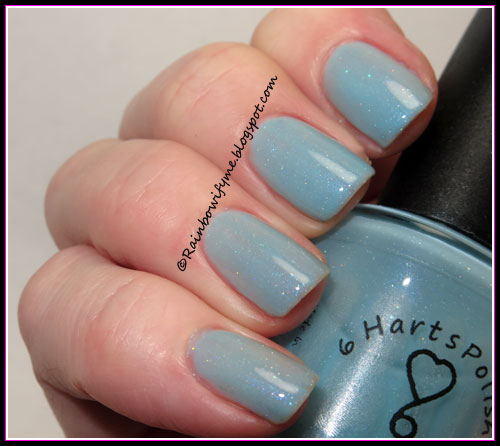 Delicate is the first word that springs to mind. I decided to spice it up with some stars. I found some vinyls I bought on evilbay (ebay) and sponged on two different colours of blue, both by Glittering Elements: Run to Paradise and Sapphire.

This is my final mani: 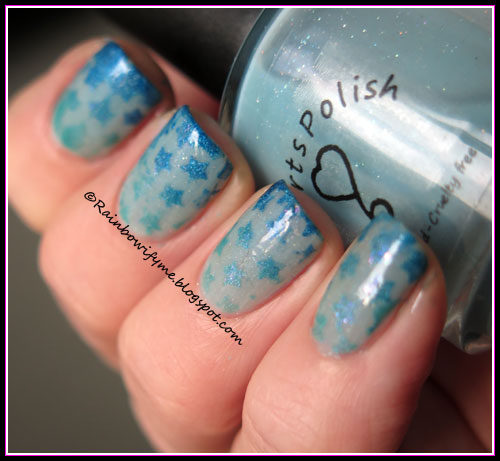 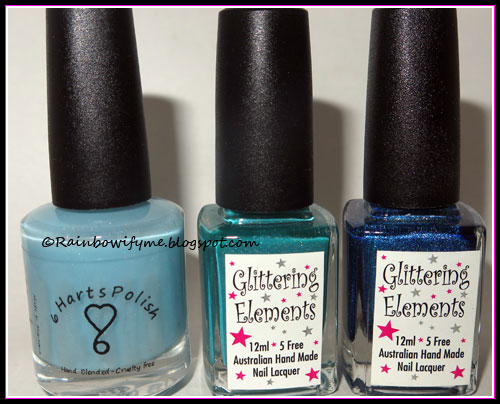 I had huge problems with the vinyls this time. They came apart when I pulled them off my nails, so I ended up picking the little bits of vinyl off my nails with a pair of pointed tweezers. Gee whiz, that was really annoying!

Number of coats: 3 but that wasn’t really enough
Drying time: Average
Finish: Jelly with shimmer
Overall impression: That’s not really my kind of polish. Too sheer, too pale.
Buy again: No
Posted by Rainbowify Me at 6:00 AM 11 comments:

First the stamping plate. It’s called Celebration BPX-L014.
It’s a plate full of hearts, roses and love and it looks like this: 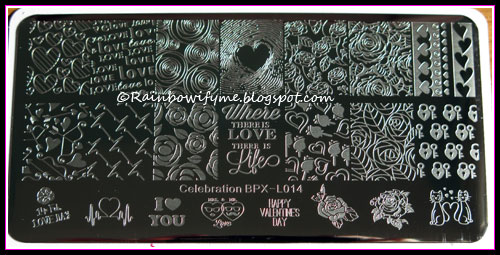 Funnily enough it came in a little sleeve that looks more like it belongs to the Christmas season: There’s both a Santa Claus and a little Reindeer on it :D I don’t mind that much; I don’t use the sleeves anyway. 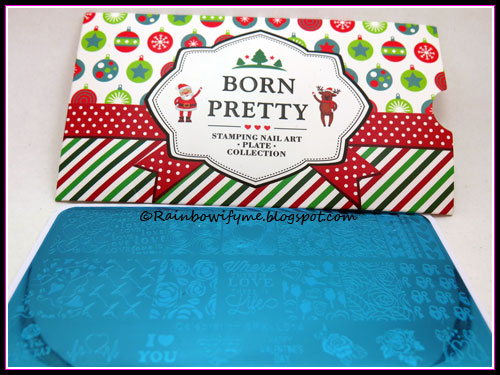 The plate is etched really well and the motifs came out totally crisp and clear. I used two different motifs on the four nails, you can actually see on the photo. I used a third motif on my thumbnail but you’re going to have to take my word for that :D 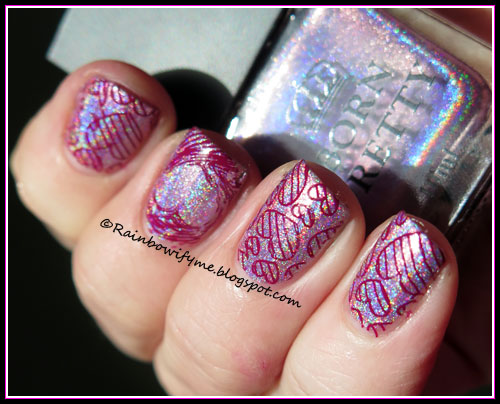 This photo is taken in the lightbox. I really like motifs with hearts. 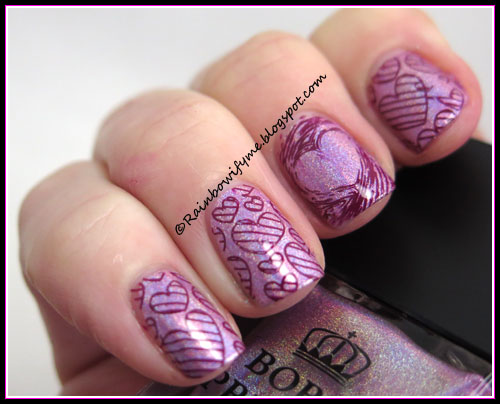 The polish underneath is called ”Together Forever” and has number H009.

This picture is taken with flash. Look at those amazing rainbows! 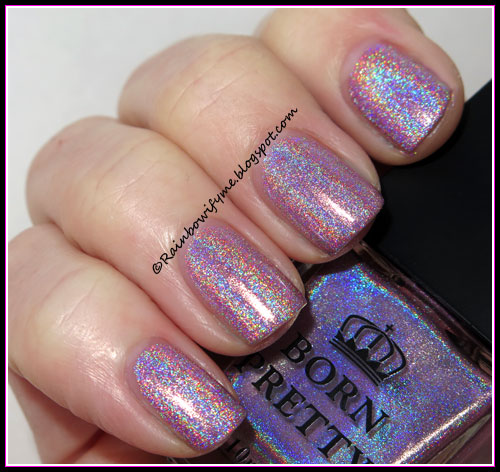 The last picture is taken in ordinary daylight on a cloudy day. The rainbows still want to play! 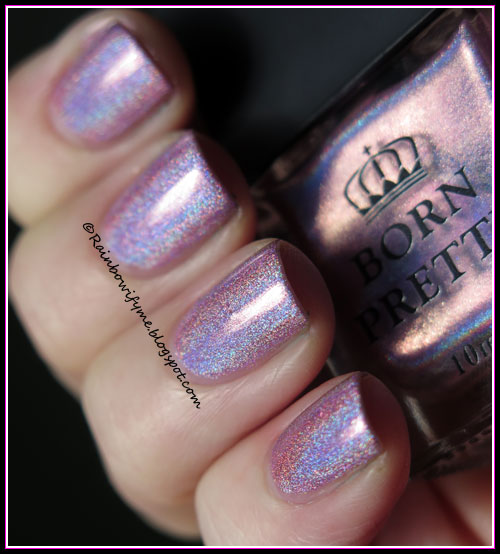 Here are the products I used: 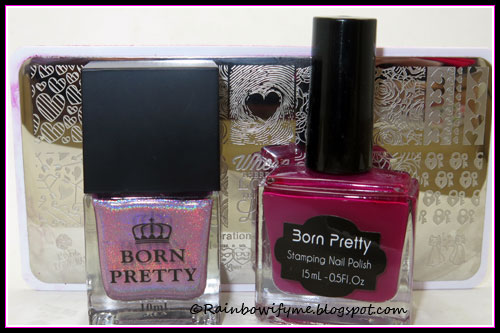