First time I saw pictures of We’ll Never Be Royals from Color Club I thought of Indian Summer from CrowsToes. I knew I had to make a comparison once I got my hands on the Color Club.

They’re both duochromatic that changes from purple to red and a bit of orange.

Here is what they look like in their bottles: 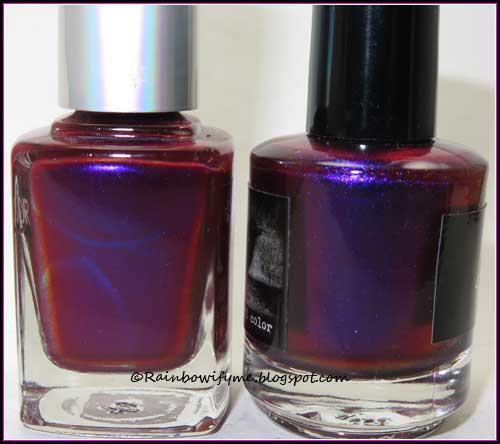 I applied two coats on each nail. None of the two polishes require underwear to do their magic.
Aren’t they just pretty? 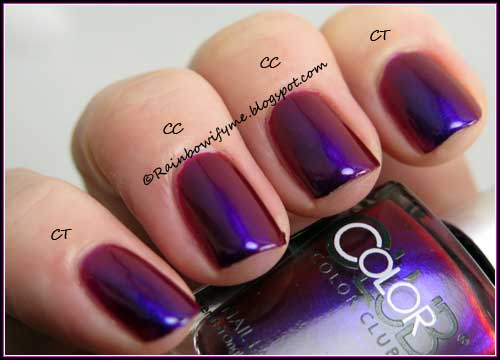 The formula isn’t the same. The Color Club is more opaque and does almost cover in one coat. CT needs two coats, there’s no way that could be a one coater. The drying time is good – that goes for both bottles.
The colour shift is equally nice in both polishes. 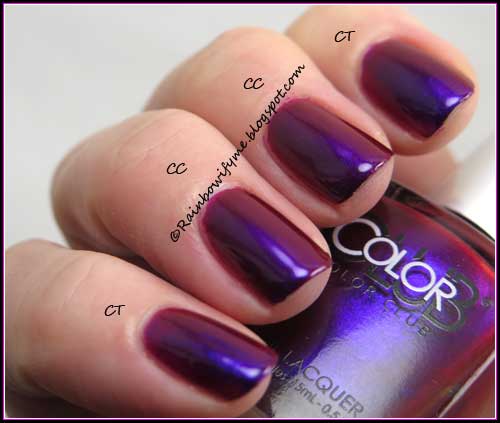 I decided to do a blind test. I showed my nails to my boyfriend and told him that I was wearing two different polishes. He’s very supportive of my crazy polish hobby and even though he doesn’t wear polish himself, he does know a lot about coverage, finishes, similarities and suchlike. I often ask him about advice about colours and do respect his opinion.

Anyway, back to the comparison. He looked at my nails and determined that the pointer and the pinkie had the same polish on and the middle and the ring finger had the same polish on. Conclusion: These are not dupes.
I asked him how he could tell and he pointed at the nails with CrowsToes on them and stated that these two are bluer than the other two. And he is right: Even though the difference isn’t huge, CrowsToes has definitely got more blue in it. Perhaps you can even see it if you compare the pinkie with the ring finger on this picture. 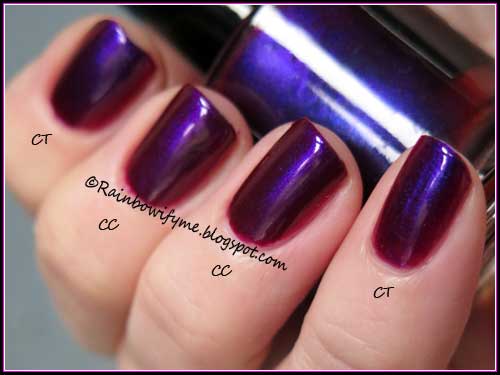 The blue shimmer is also visible on this picture. 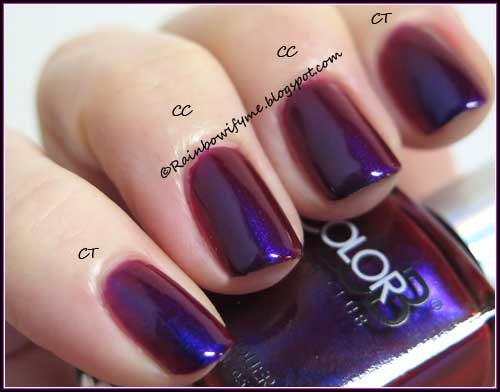 But all in all it’s two good polishes and I could easily wear them together like this without anybody noticing but my boyfriend ;) 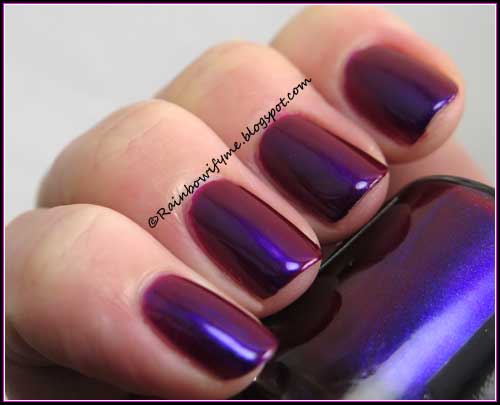 Conclusion: Not the same but very similar.

Prices:
CT: US$12 on http://www.crowstoesnailcolor.bigcartel.com/product/indian-summer
CC: US$7 on ebay

I am going to keep both my bottles, because they’re so beautiful! ♥

Number of coats: 2
Drying time: Very good
Finish: Duochromes
Overall impression: Wow, these two are amazing
Buy again: Yes to both!
Posted by Rainbowify Me at 6:00 AM 16 comments:

Affirmative is from the Hug My Face collection from Autumn 2015.

The formula is good and the polish covered in two coats. The drying time is good.

I made a peacock mani out of it, take a look: 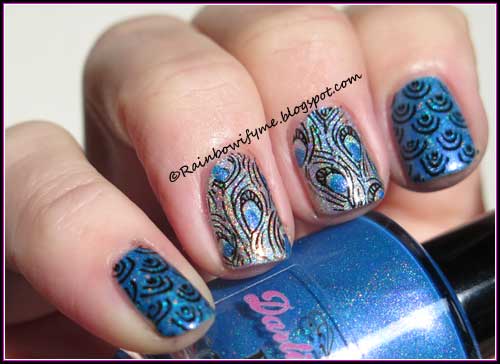 The silver on my ring finger and the middle finger is Urban Outfitter’s Silver Holo, my to go silver holo. The stamps are both from Emily de Molly’s plate EDM04, a plate full of peacock designs. I love that plate!
I even stamped an entire peacock on my thumbs. 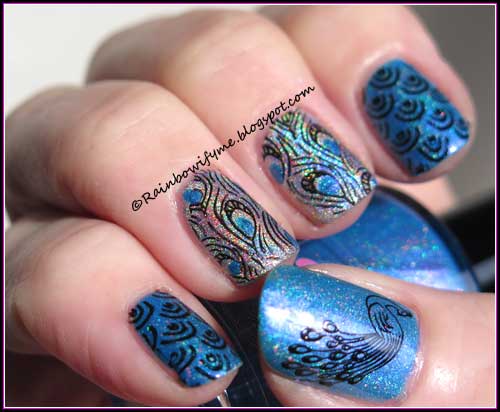 Here’s what Affirmative and Silver Holo look like on their own. They’re both really good polishes. Me likee. 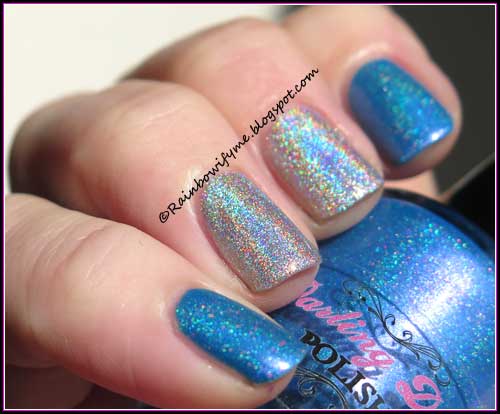 These are my first two Colour Alike polishes and I got them in a swap with sweet Joanne from Joanne’s Polishes. It’s been a while since I watermarbled last, so I decided to use them for that.

I applied two layers of 513 on my pinkie and my pointer. It applies easily, and the drying time is on the slow side. I applied a single layer of 513 on the ring finger and the middle finger, just as underwear.

Here’s the final mani with flash: 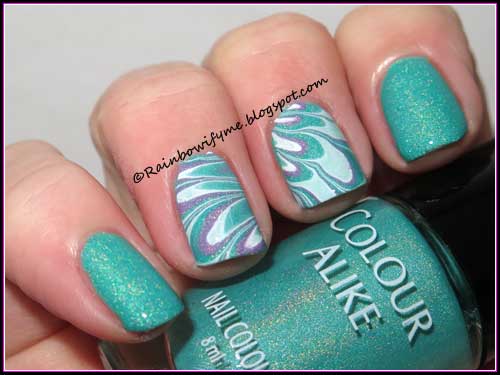 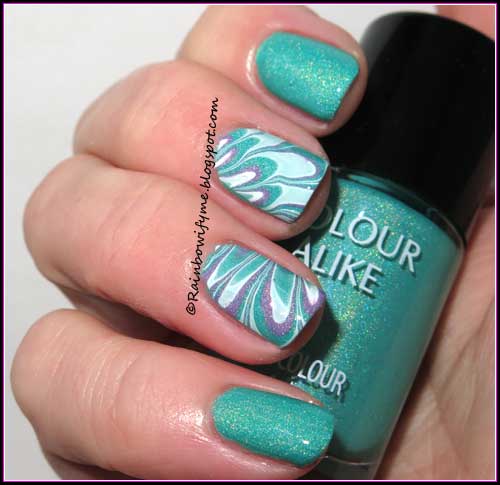 Here’s a picture taken in the shade. 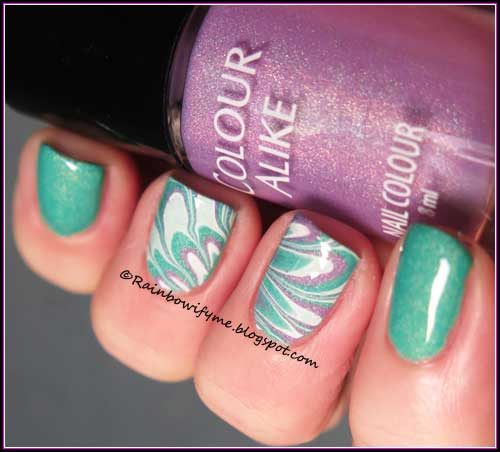 The polishes I used: 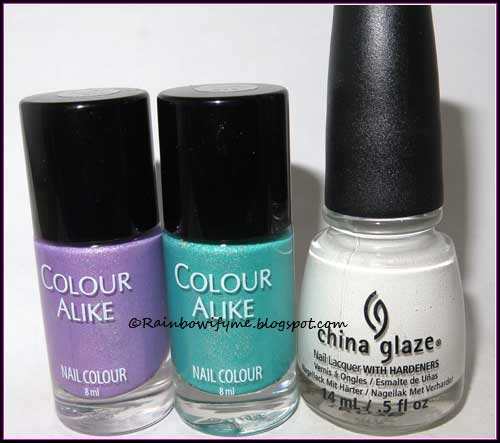 I like my new polishes and I love that they watermarble too! So thanks Joanne, for swapping with me. We must do that again some day :D

Colors by Llarowe ~ Fall-O Me

Fall-O Me was Llarowe’s polish of the month for October 2015. It’s the third in the row, and we’ve had a teal and a purple so far, and now another purple. I really don’t mind – I like purples :)

The formula is good and I had no issues with application. I used two coats for full opacity and the drying time between the coats was good.

Here’s what the polish look like in the morning Autumn sun: 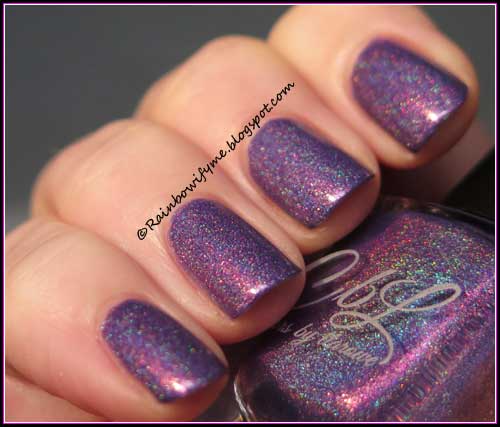 The holo effect isn’t in yer face, but I really like the pink sparks. 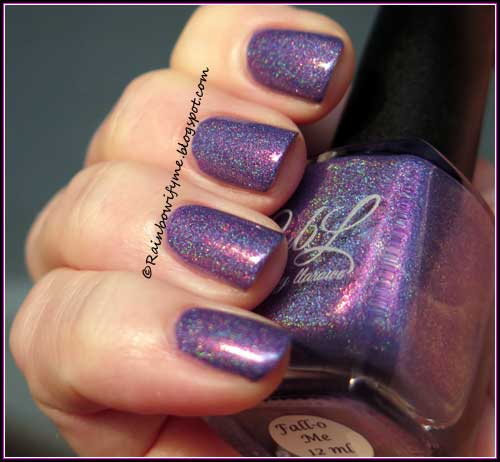 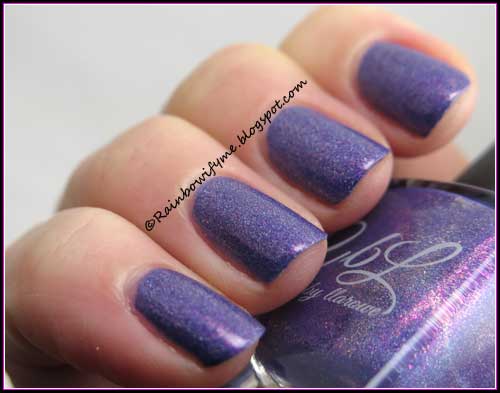 I painted horizontal stripes on two nails and made dots on two. I used a green striper from Quo by Orly. It’s called Teal Green, so I guess that’s what it is :D 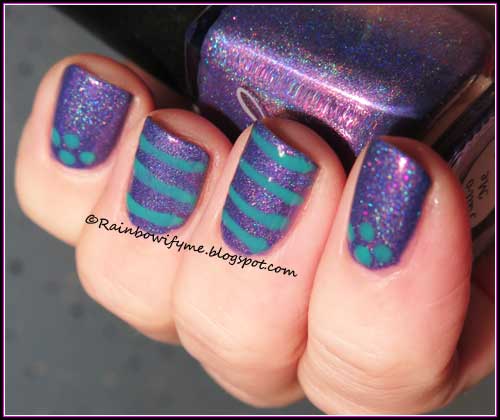 The polish was only available for purchase in October, so it’s discontinued now and no longer available. I shall guard my bottle well.

Number of coats: 2
Drying time: Good
Finish: Weak linear holo with sparks
Overall impression: I like the colour and the sparks. I sooo would have loved some stronger rainbows, but that’s just me being greedy! :D
Buy again: Yes
Posted by Rainbowify Me at 6:00 AM 12 comments:

I haven’t been 100% satisfied with my manis the last couple of days. I hate making something that I don’t really like and then don’t have the time to change it. I was not in the mood for a third day with a mani I wasn’t happy with so I decided to play it safe today. No experiments, no way, not today, Jose!

I dug up Cygnus Loop from the box where it has been sitting for way too long. I applied two easy and fast drying coats for full opacity. This colour shifter does not require black underwear, it works all by itself. I like that!

Here’s two coats and no topcoat: 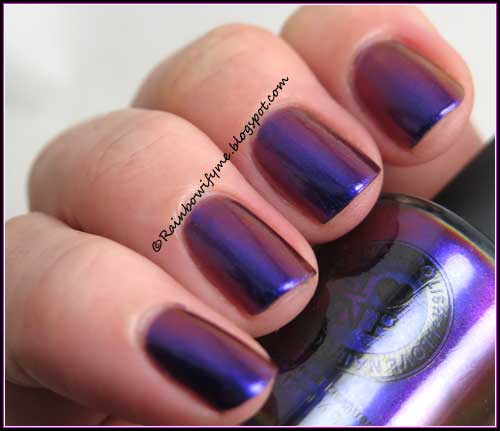 Look at that colour shift! Wow! 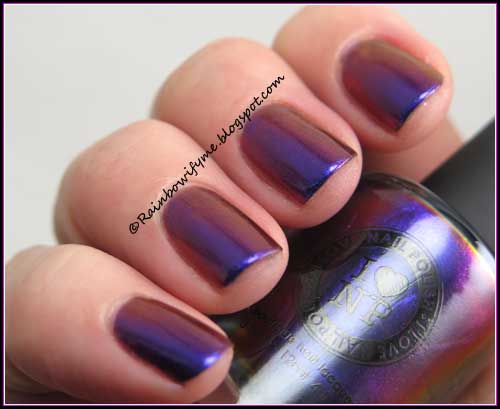 Playing it safe like I said. I glued on a pink stud by the base of each nail and applied a layer of Out the Door’s “Northern Lights” holo glitter topcoat on top of it all. 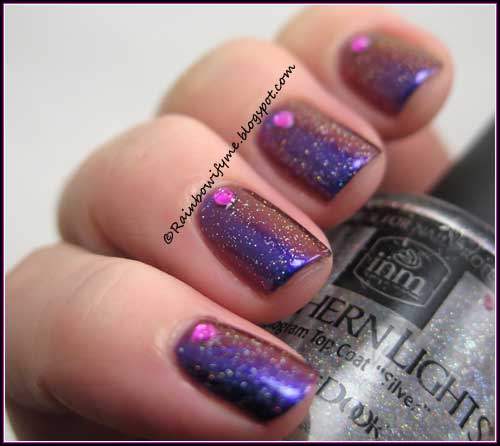 The colour shift is still amazing. 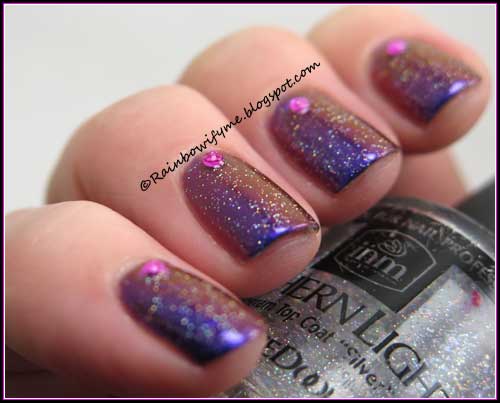 Now that’s a mani I like wearing. It’s simple, and yet eye catching and it ticks all the right boxes.

Number of coats: 2
Drying time: Good
Finish: Multichrome with shimmer
Overall impression: Amazing colour shifter and great quality polish
Buy again: I would
Posted by Rainbowify Me at 6:00 AM 18 comments: