Arcane Lacquer shut the business down in 2016, so this polish is another one that has been sitting way too long in the infamous box. And yes, I am trying to move some of them into my Helmers now, so others can take their place.

The formula of "Midnight Swim" is good for a jelly. I used two coats for my nails today. When I look at the pictures it makes me think that I should have gone for a third coat. Oh well. The drying time was average.

The stamped leaves are from the stamping plate "ShopAnts XL-006". I stamped with a stamping polish from El Corazón called "Turguoise".

Here's the final manicure, including a layer of topcoat. 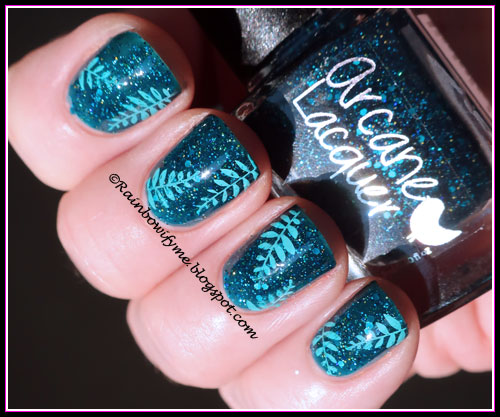 I must admit that I really dig this. 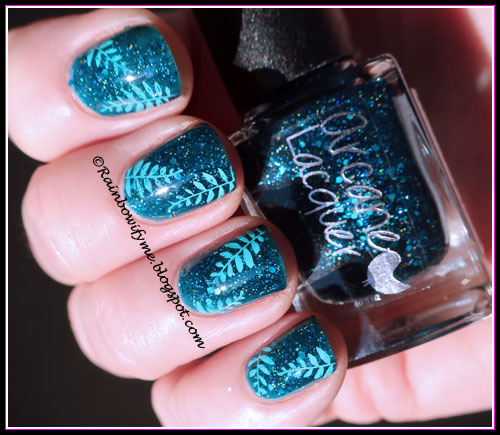 And this is the stuff I used today. 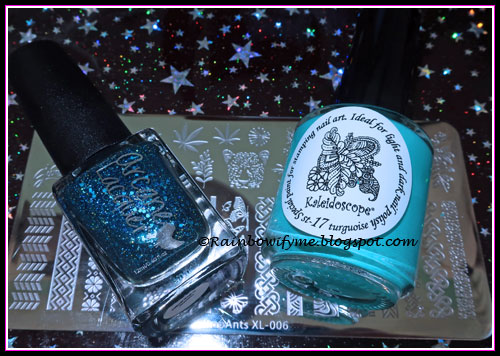 I like this way more than I thought I would. The colour is great and I love the glitter! Great little gem!
Number of coats: 2
Drying time: Average
Finish: Jelly with glitter
Overall impression: Great colour and the formula is good for a jelly
Buy again: Yes
Posted by Rainbowify Me at 6:00 AM 4 comments:

"London Calling" is a part of A England's Subcultures collection.

Here's what A England wrote about "London Calling":

This classic song by British punk-rock band The Clash is an apocalyptic, and politically-charged, rant featuring the band's signature post-punk sound that’s heavy on both electric guitars and vocals.

The title comes from the BBC World Service’s phrase “this is London calling...", which was used during WWII in broadcasts to occupied countries.

The polish didn't correspond well with my base coat and applied really patchy on the first layer. It's a shame because this polish is relatively thick and really well covering, so it has potential of being a one coater. I needed a second coat to even out the patchiness. The drying time is really good.

I dapped on a bit of white/silver glitter from Moyra called "Elise". Then I stamped flowers on top of it all. The flowers are from Born Pretty Store's stamping plate "Floral BPX-L002". I stamped with El Corazón's stamping polish "Midnight Tango".

I topped it all with topcoat to seal it up and here's my final manicure. 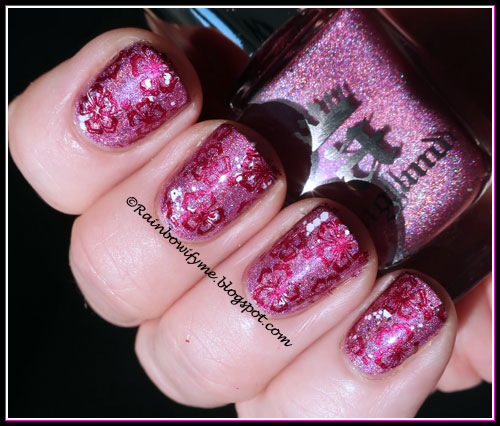 I think this is really pretty in the sunshine. 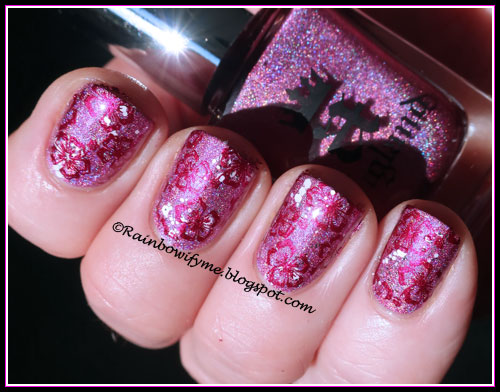 Here's "London Calling" alone; two coats and no topcoat. It has some really pretty rainbows.

And these are the things I used today. 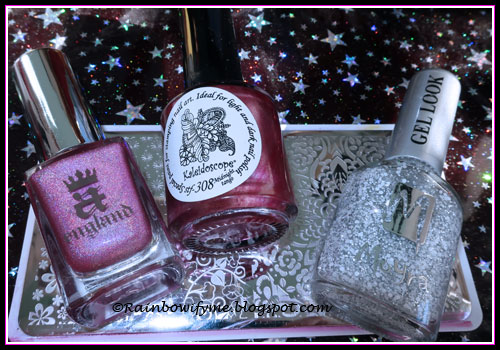 This was a different experience for me. I love the polish in the bottle. I wasn't loving it when I applied it because it was so patchy. But once I actually wore it, I loved it again.

Bonus: Here's the video that this polish was named after. The Clash: London Calling
Number of coats: 2
Drying time: Really good
Finish: Linear holo
Overall impression: Nice colour and finish. I'm not crazy about the patchy formula
Buy again: Yes
Posted by Rainbowify Me at 6:00 AM 4 comments:

Today's polish was a part of a subscription box called "The Holo Grail", and was released in April 2014. That was a lovely subscription box because all of the polishes in the box were holographic. The only reason that "Rare Book Room" has been sitting in the box of untrieds for over six years is because it's brown. I love the brand Literary Lacquers and the holo effect of "Rare Book Room" is absolutely awesome. My only problem with the polish is that it's brown - which is not my favourite colour.

The formula is a crelly and I used three coats for full opacity. The drying time was really good.

I applied a butterfly sticker onto two of my nails and made two dots on the remaining three nails. Then I sealed it up with topcoat and took my photos.

I would have absolutely loved this polish if it had been any other colour than brown. 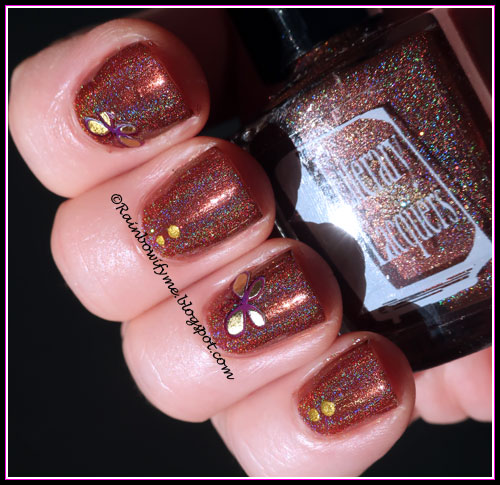 And here are the things I used today. The gold that I used for the dots is El Corazón's stamping polish "Fragrant Mimosa". 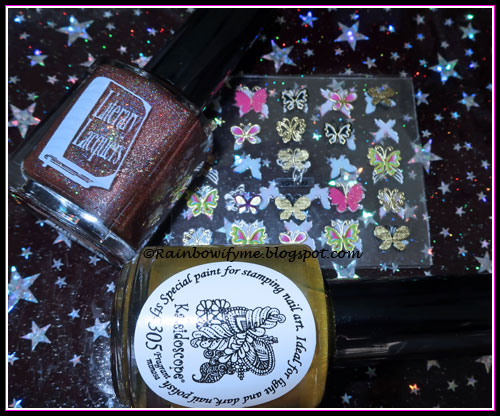 "Rare Book Room" was limited edition and is no longer available.

Number of coats: 3
Drying time: Really good
Finish: Beautiful strong linear holo
Overall impression: Really nice rainbows. Not a fan of the colour.
Buy again: No, because it's brown
Posted by Rainbowify Me at 6:00 AM 4 comments:

Does anyone remember Nabi's holographic polishes? There is a great range of beautiful colours and finishes. All of my Nabi polishes are holographic.

"Fushia" (yes, it's spelled that way on the bottle" is a gorgeous colour. The formula tend to be a tiny bit patchy if you're not careful. I was careful and ended up with two coats. The drying time was good.

The stamp is from Lina's stamping plate "Feeling Shapely! 01" and I stamped with a white stamping polish.

All the Nabi polishes I have tried have been bleeders, which means that their colour bleed through to the stamping colour when topcoated.

I took these first photos without topcoat: 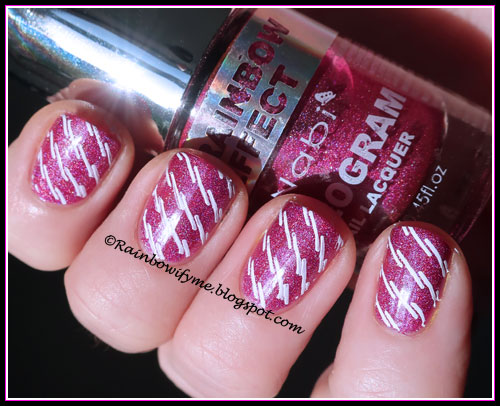 I think this is really gorgeous. 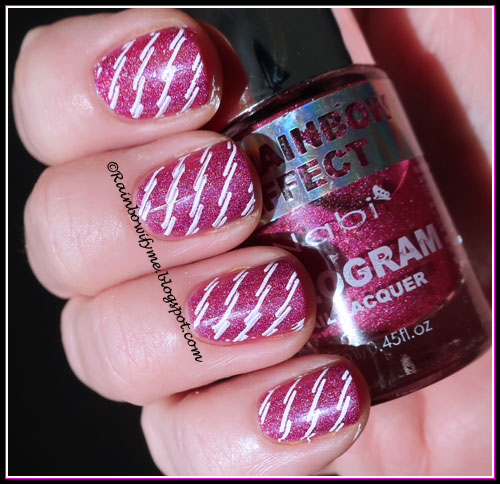 Look what happens when I add topcoat: 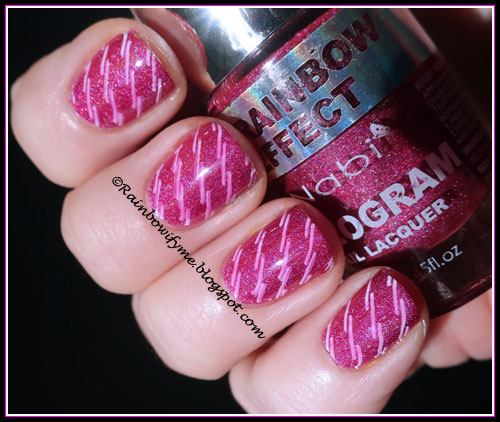 My biggest problem with the bleeders is that they don't seem to bleed in a "regular" way. The more topcoat, the more they seem to bleed. That means that if you don't apply exactly the same amount of topcoat all over the nail, then your nail art will look pretty irregular. I can live with that, but it's not great.

Here is "Fushia" alone; two coats and no topcoat. It's a lovely colour, despite the fact that they misspelled it.

And here are the things I used today. 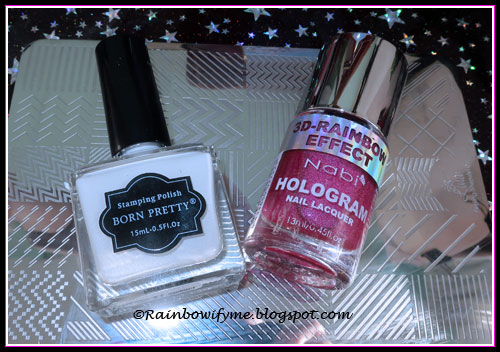 I really like this polish, I think it's gorgeous!
Number of coats: 2
Drying time: Good
Finish: Holographic
Overall impression: Really nice colour and finish. The formula a bit patchy
Buy again: Yes
Posted by Rainbowify Me at 6:00 AM 4 comments: