If you haven’t been in the nail polish world for long, then you might wonder if Ninja Polish is a new upcoming brand. It isn’t. It’s a sad story, really. The story started out really well. Ninja Polish opened up as a webshop where you could buy all the polishes that were hard to get for us non-American girls. The shop also sold some of the very sought after Brazilian brands HIT and Jade, plus her own really cool polishes: Ninja Polish. It was such a fantastic shop, customer service was great and so was the shipping time. It was a ninja shop for sure!

After a while something happened. Shipping suddenly weren’t as fast and there was no communication to the customers. I had friends who waited months for their polishes to be shipped. It turned out that the owner was in the middle of a difficult divorce. I have full sympathy for life interferences but in my opinion it was a mistake to keep the shop open and not fulfil obligations. Don’t take people’s money if you aren’t going to give them something in return. Or at least communicate. Eventually she shut the shop down.

After another while, Ninja Polish reopened the shop. The number of brands were narrowed down. It was when the shop reopened, I bought Flibbertigibbet along with a couple of polish sisters. It took 10 days from I ordered to I received a shipping notification. I must admit that it made me nervous, so I was really happy when my shipping notice arrived.

The Facebook page is last updated October 14,2016, where the owner and maker states:
”I apologize for the lack of communications and fulfillment recently. All open orders were refunded yesterday. The store will remain online for browsing but inventory is pulled at this time until fulfillment can resume in a timely manner”.

The shop is still open but everything is marked as sold out.

When I browse the Internet I find a lot of stories of girls who had to file a Paypal claim in order to get their money back.

It’s a shame really, because Ninja Polishes are really great polishes. But I must admit that I’m not going to trust her with my money again. I’m still going to cherish the Ninjas I’ve got though!

Which brings us back to today’s manicure!

I used two coats of Flibbertigibbet, sprinkled a few iridescent glitters on each nail and then stamped a water marble design on it. The design is from the plate BP-L061 and I stamped with a stamping polish from El Corazón called Restless Night. The glitter I used is from Jordana and is called Lunar Nights. That’s two Nights and a Flibbertigibbet in one single mani! :D

This is my final mani in the sun, including a layer of topcoat. 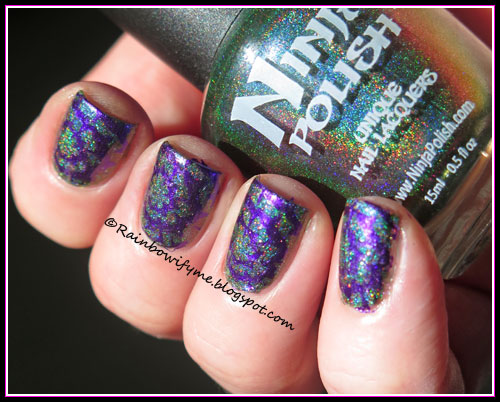 This is taken in my lightbox to show off the glitter and the stamping design. 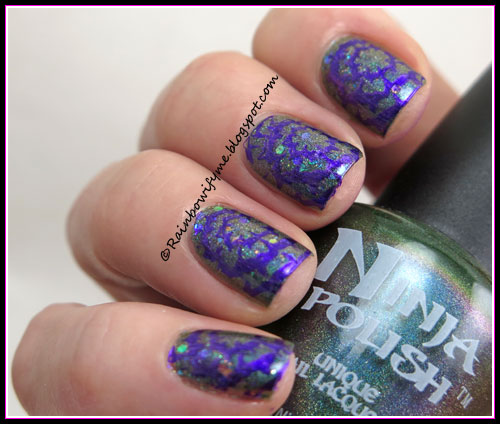 Flibbertigibbet is really beautiful in the sun where she gets to show all her pretty rainbows. 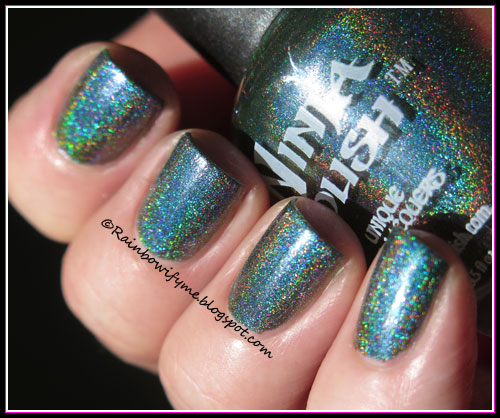 Here it is in the shade. The colour shift isn’t prominent and the colour is a bit murky. I wouldn’t wear this polish on its own. 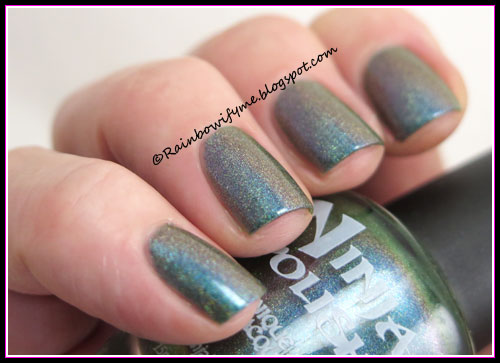 Here are the three polishes and the stamping plate I used for my mani. 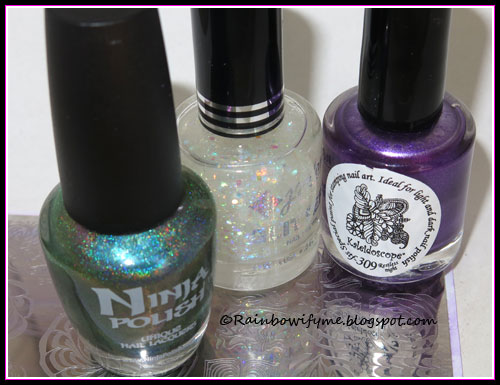 Do you know Ninja Polish? Please share your experiences with the shop in the comments below.

Number of coats: 2
Drying time: Good
Finish: Linear holo
Overall impression: Good formula, lovely rainbows. The colour is too murky to me.
Buy again: No
Posted by Rainbowify Me at 6:00 AM 6 comments:

KBShimmer ~ I Never Wood have Guessed

I Never Wood have Guessed was launched in Indie Shop Atlanta this spring, and was for sale for a short period of time after that. I snagged a bottle even though brown isn’t really my colour, because you never know: I might ending up liking it.

The formula is really good like I have come to expect from KBShimmer by now. I don’t think I’ve ever been let down by a KBShimmer. I used two easy and fast drying coats for my mani. I stuck on two butterfly stickers and applied topcoat and then my nails were done.

Here’s two coats and a layer of topcoat in the sun: 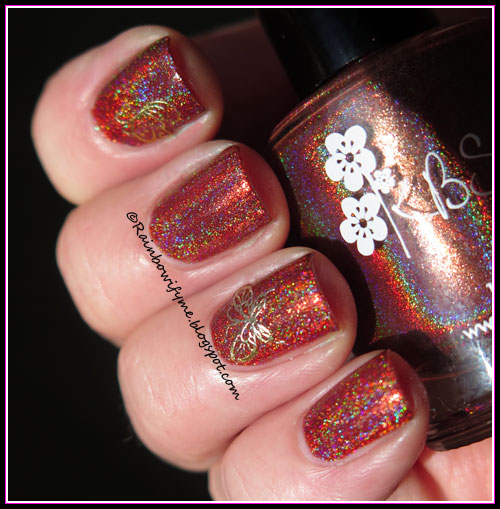 This is what I Never Wood have Guessed in the shade. 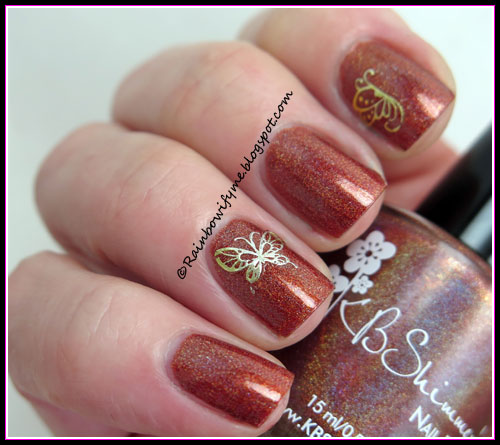 Brown isn’t really my colour so this will never be a favourite of mine. Having said that – it is a lovely polish and quite a pleasant brown so if you’re a lover of brown polishes you might want to check out if you can find it in a blog sale somewhere.

I Never Wood have Guessed was limited edition and is no longer available.

Number of coats: 2
Drying time: Really good
Finish: Linear holo with shimmer
Overall impression: Great quality polish, not my colour but that’s not the polish’s fault
Buy again: No
Posted by Rainbowify Me at 6:00 AM 6 comments:

Blue Suede Stews is from the #Autocorrect collection from Summer 2016.

The stamp I used is from Lina’s Make Your Mark 03 and I stamped with a metallic red stamping polish from El Corazón called First Kiss.

Here’s my final mani in the sun, including a layer of Moyra’s stamping topcoat. 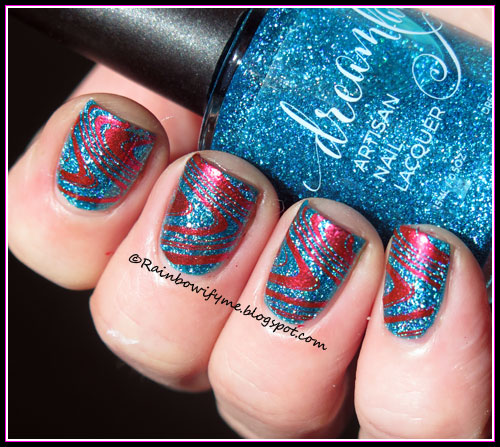 I absolutely love this mani! Here it is in my lightbox. That blue is just amazing in any sorts of light. 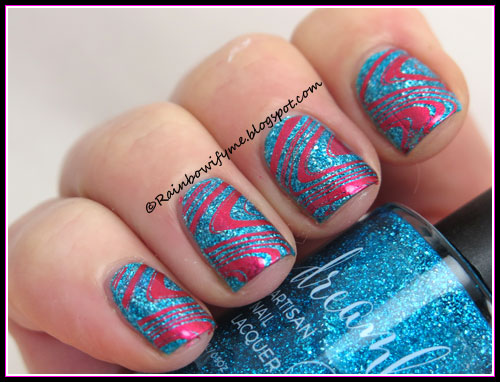 Blue Suede Stews on its own. Two coats and no topcoat in the sun. 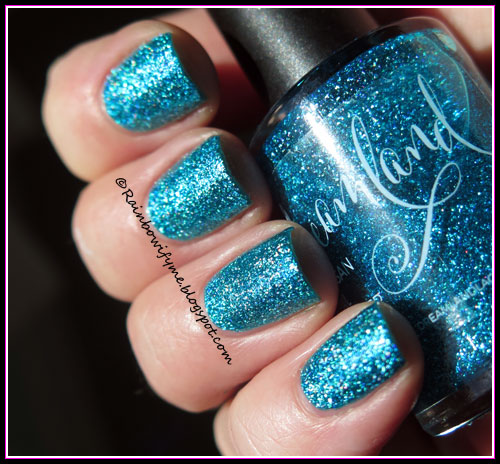 The polishes and the stamping plate I used. 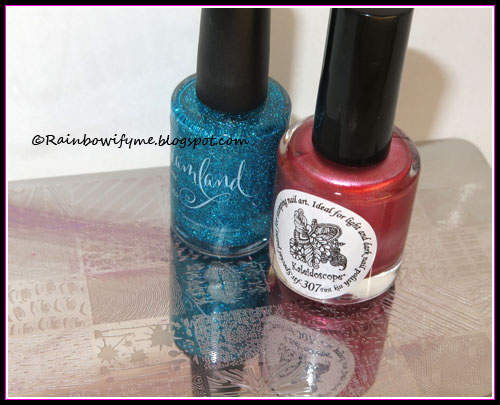 I’m really glad I bought the #Autocorrect collection. It’s a bunch of really cool polishes! (My BF was hoping that this might be a really boring polish, and then I could have reviewed it as ‘Blue Suede Snooze’. But he was sadly disappointed haha!)
Number of coats: 2
Drying time: Really good
Finish: Jelly with holo flakes
Overall impression: Great formula and colour, I love the finish too!
Buy again: Yes
Posted by Rainbowify Me at 6:00 AM 8 comments: