Colors by Llarowe ~ Love and Madness

Love and Madness has been sitting in the box of untrieds for a very long time. It came out in 2014 as a part of the Mysterious Vanishing Pigments Collection. It was a collection of eight polishes which all were limited edition because the pigment used is no longer available.

The formula is good and the polish covered in two coats. The drying time was good too.

I paired it with another polish from the unmentionable box. It’s a glitter from Vapid Lacquer called Rainbow’s End. I received it in a swap from a girl who thought it was fun to send me polishes that had the name “Rainbow” in them – because of my blogname. I think it is funny too, and I appreciate the effort. The reason that Rainbow’s End has been sitting in the box for so long is that the glitter is golden – and I don’t really wear golden glitters or shades that often. But never mind – it’s a beautiful glitter, and it’s not the glitter’s fault that I like silver better! :D

This is the final manicure including topcoat: 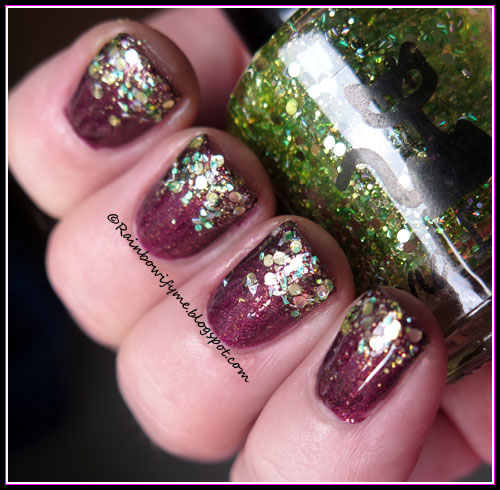 The same thing taken in the lightbox. 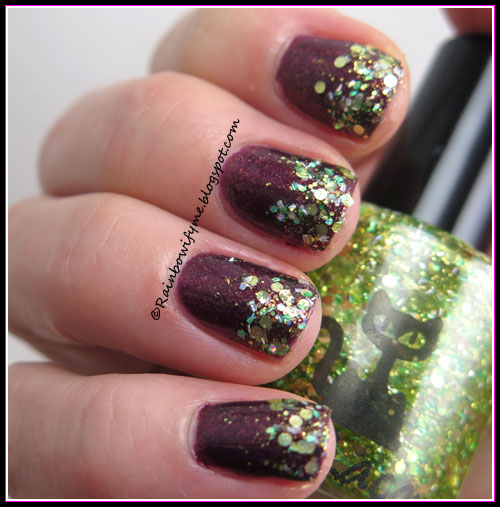 Here’s two coats of Love and madness in the lightbox. There’s no topcoat involved yet. Look at the pretty flakies! 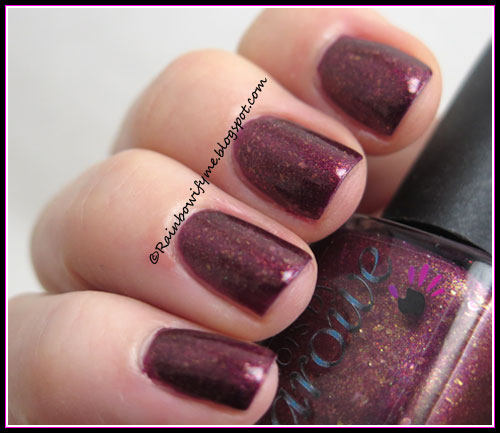 This is the same thing, just in daylight on an overcast day. 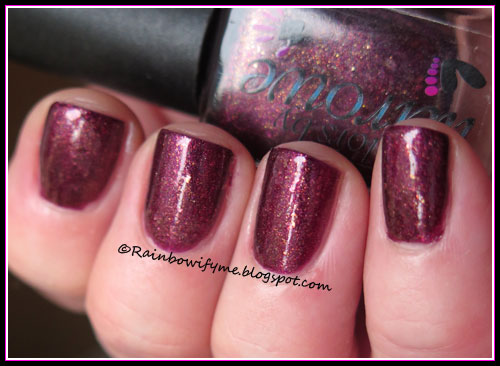 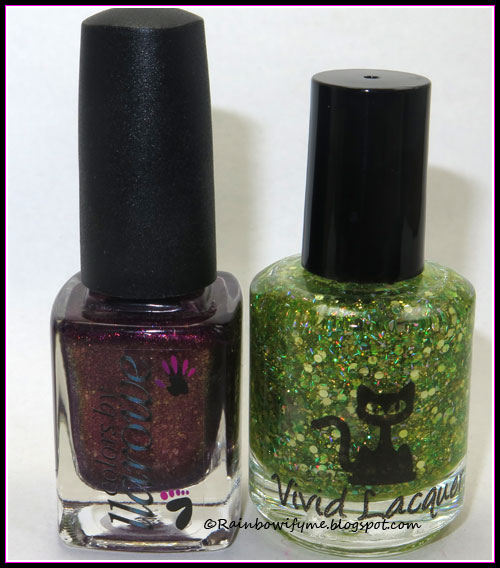 Love and Madness has a brown tone to it, and I don’t usually like brown polishes. But I must admit that this colour goes really well with my skin tone.
It was limited edition as I wrote earlier on, and I’ll definitely keep this polish.

I Just Canterlot is from the My Little Pony collection from Summer 2017, just like "Where’s the Party Canon At?" and "I Sea Ponies" that I already showed you. Click the names to be taken to those posts if you missed them.

I Just Canterlot is really pretty in real life. The swatches I have seen doesn’t really do the polish any justice. By looking at swatches I got the idea that the two glitters from the My Little Pony collection were sheer and that they would leave visible nail line. But they don’t – they covered in two coats, no worries whatsoever! (Incidentally this polish’s name must be the poorest play on words I’ve ever encountered. Huh.)

The formula is a good and the polish covered in two coats. The drying time is good.

I made a tape manicure out of it. I used an older China Glaze: Urban Nights, which is from the Metro Collection 2011. It’s a beautiful deep eggplant purple crème that I have been considering to sell a number of times. I always ended up deciding to keep it, which is a good thing! :)

This is the final manicure taken on a cloudy day, no sun. 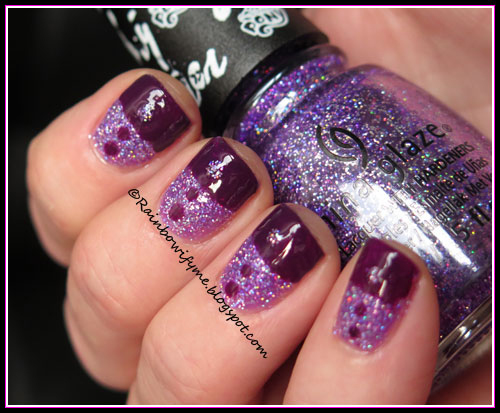 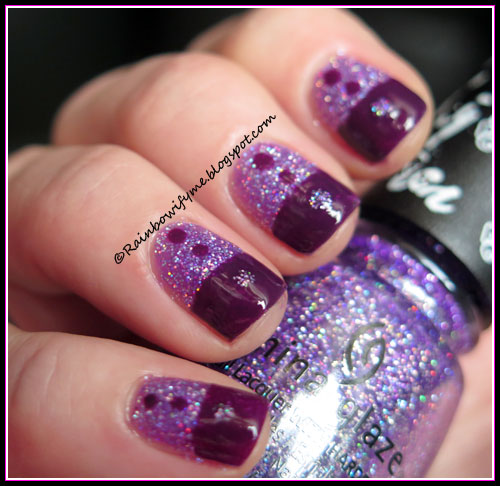 This is I Just Canterlot on its own. It’s two coats and a layer of topcoat. 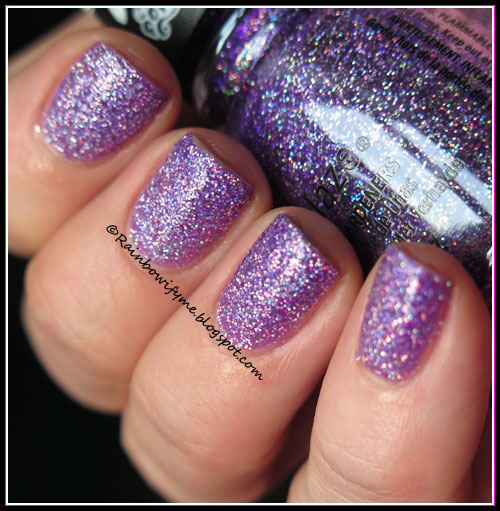 The polish dries up textured because of the glitter. I used two layers of topcoat and it still wasn’t smooth. Fortunately I don’t mind at all.

Here’s the picture with the pretty China Glazes. 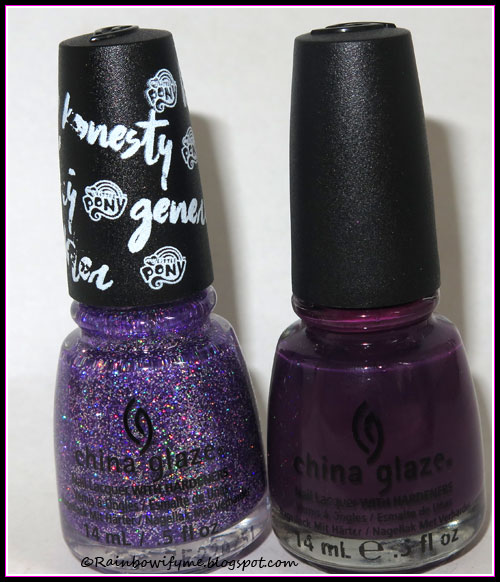 I don’t do many tape manicures anymore but I might take it up again because it can look really cool.

Where’s the Party Canon At? is from the My Little Pony collection from Summer 2017. When I saw the first bottle shots of this collection I knew I was going to want the glitters. Once the swatches started to come out I wasn’t so sure anymore. I haven’t seen any swatches that do this beautiful polish justice! I decided to give it a chance anyway, and I am happy that I did.

The formula is a good’un and the polish covered all visible nail line in two coats. This polish is so full of glitter that I just know it’s going to be really difficult to remove - but my friends, do I care? No my friends, I do not!! :D The drying time is good too, b t w :)

I stamped on it. Surprise! The design is from Lina’s stamping plate Feeling Shapely! 02, and I stamped with a dark purple stamping polish from El Corazón called Restless Night. This is the final manicure photographed in the sun. 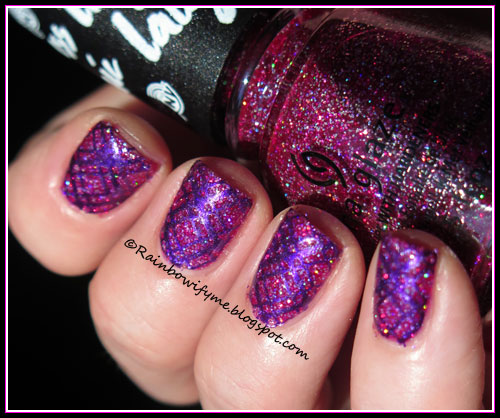 This is what the manicure looks like in the lightbox. I quite like these two colours together. 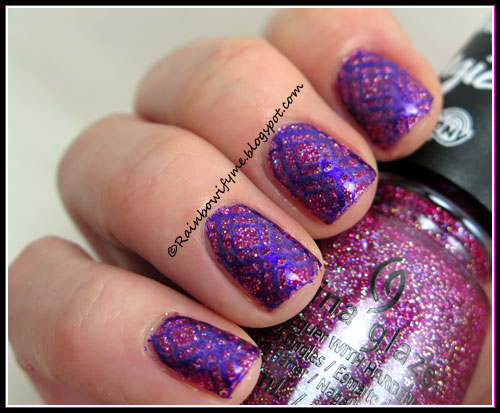 And this is Where’s the Party Canon At? on its own. It’s two coats and a layer of topcoat. The polish dries up textured because of all the glitter. I used two coats and after half a day it was still bumpy. I don’t mind myself – I just mention it in case you’re a girl who wants her nails completely smooth :) 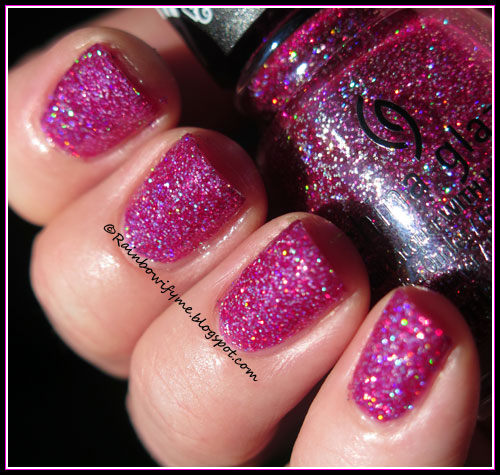 Here’s the picture with today’s participants. Tomorrow I’m going to show you the other glitter from the collection. It’s called I Just Canterlot and it’s purple. Stay tuned please.

Number of coats: 2
Drying time: Good
Finish: Jelly with silver and holo microglitter
Overall impression: Ooh la la! This is a beautiful polish.
Buy again: Yes
Posted by Rainbowify Me at 6:00 AM 6 comments: