Bizarre Blurple is from China Glaze’s Wicked Halloween collection from 2012.
It was a collection which there was a huge fuss about, because it turned out that the artwork used in marketing the collection was actually stolen. The artist that China Glaze hired to make some pretty artwork, actually (and very cheekily) took some of Abigail Larson’s artwork and made it his own instead. That’s just too naughty, in my book – it’s actually called ‘Plagiarism’, you know. The incident was resolved though... China Glaze went after the hired artist, and then offered Abigail both compensation and a job. So justice was served. Check out the original artwork vs. the stolen product at the end of this post. Abigail is good, and no doubt China Glaze’s hired hand appreciated that, and sadly had nothing original in his own head to offer.

OK. The formula is typical for China Glaze, which works fine for me. It took two coats to reach desired opaqueness, and I must say that Bizzare Blurple fits its name perfectly. It isn’t really blue and it isn’t really purple, but it sure is pretty! 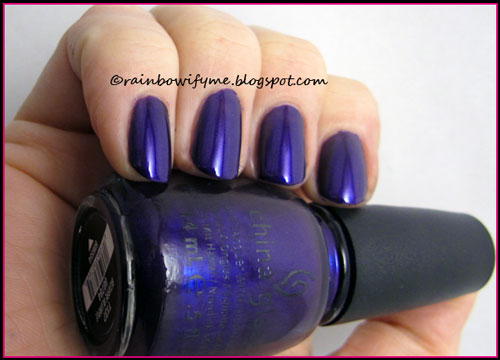 I had stamping in mind for this baby, but that was a mistake. I chose Cheeky stamping plate CH07, and stamped with Essie’s Nothing Else Metals, which is a lovely silvery lilac metallic polish, that’s perfect for stamping. But not today! I don’t know what went wrong, but all my stamps smeared and got to look extremely ugly. I don’t know if the design may be etched a little too deep on the plate, or what the problem was, but fact is, that I’m not going to use that stamp again, that’s for sure.

Here’s how it looked: 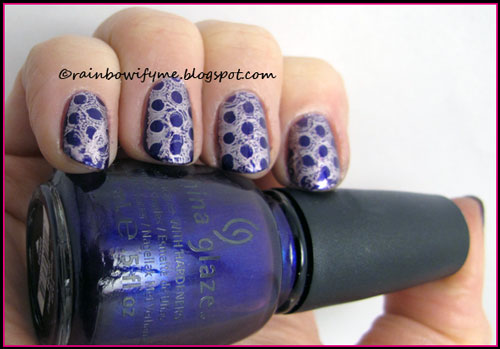 There’s a coat of Poshé top coat over it – but just for the record: It was smeared before the top coat was involved.

And here’s the promised picture of the artwork there was such a fuss about last autumn. 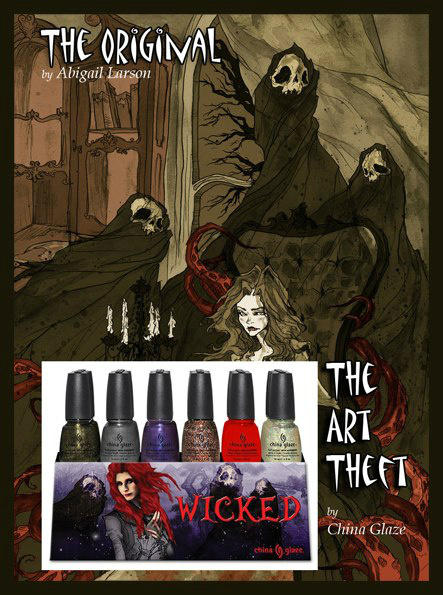