Colors by Llarowe ~ Pirates of Penzance

Inspired by yesterday’s mani I decided that I wanted to wear a polish that I had used before. I wanted to wear red, so I went through my CbL-polishes. She makes great reds in my opinion. I ended up with Pirates of the Penzance, an amazing holographic red from the Pirates of Penzance is from the Pretty Woman 25th Anniversary Collection that was released in spring 2015.

I’m going to show you the final mani first: 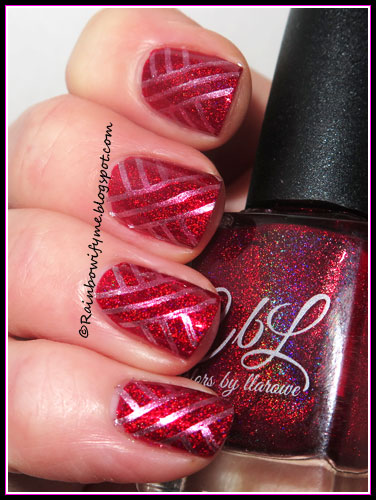 The stamp is from the stamping plate from Moyou London “Holy Shapes Collection-01” and I stamped with China Glaze’s Chrome is where the Heart is. I topped it with topcoat and since Pirates of Penzance is a bleeder, the China Glaze appears way more pink than it actually is. I like the effect a lot.
This picture is taken in ordinary daylight, no flash. Here’s a picture of the polish on its own. It’s such a beautiful red! 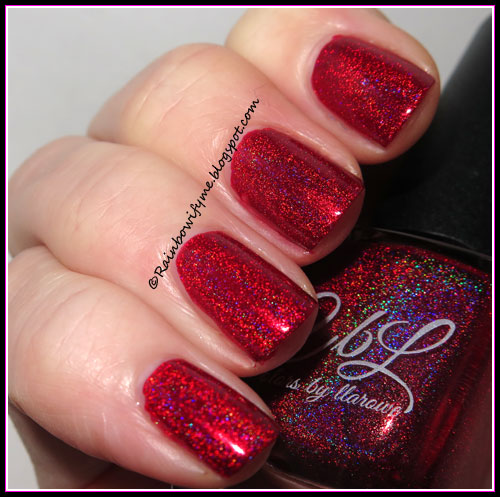 Just for the record (again): The formula is really good and was almost opaque after the first coat. The second coat enhanced the colour and made it even more beautiful. The drying time between the coats is good

Number of coats: 2
Drying time: Good
Finish: Holo shimmer
Overall impression: Wow, it’s an amazing polish. It could easily move into my pile of favourite reds!
Buy again: Yes
Posted by Rainbowify Me at 6:00 AM