Kleancolor make a lot of pretty polishes, no doubt about that. But there’s one thing that puzzles me, and that’s how different the formulas are from one polish to the other. Some of them are a dream to work with, and others are just living hell.

Blue eyed girl is such a polish (the living hell variety). It’s very difficult to apply, both because the jelly is so thick but also because the hexagons are curly instead of flat. That means that you have to manoeuvre the brush around to spread them evenly onto your nail. It is pretty opaque though, I only needed two coats to reach the desired opaqueness.

Here’s two coats, and one coat of Poshé top coat. 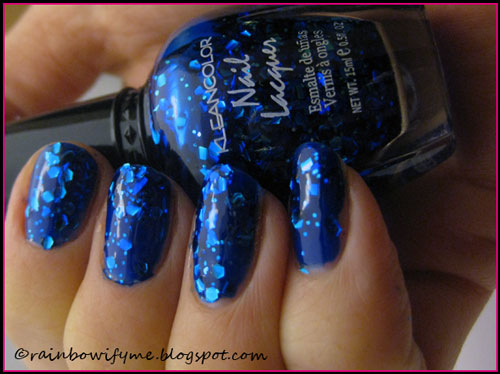 I really like the extraordinary depth in this polish. It’s rather bumpy though… 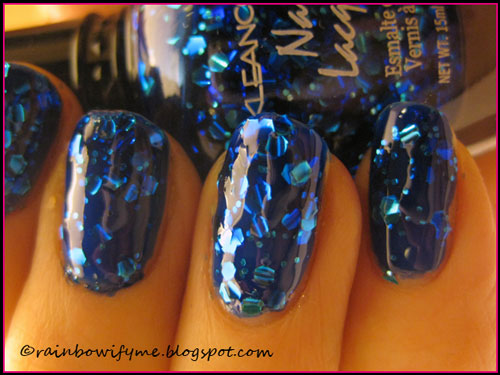 However, pretty as it is, this polish dries *very, very* slowly; in fact so slow that I decided to use my China Glaze “Fast Freeze Quick Dry”, which I bought by mistake and hardly ever use. It’s amazing stuff, though - it really does dry all the layers of polish, as if by magic. My mani certainly wouldn’t have survived the evening without that! 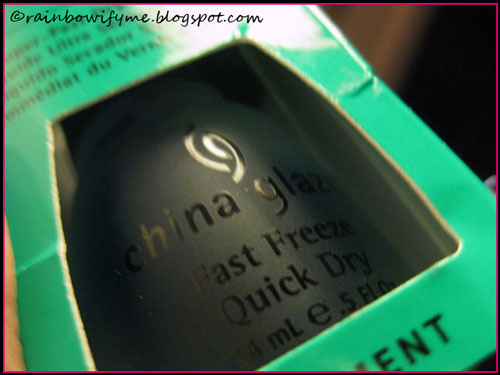 Later that evening I applied an extra layer of top coat, to smooth out the surface completely. I quite like it, but it’s tricky to work with.

Beware though! This took two people half an hour to get off my nails again. It took two times the foil method, and then we ended up scraping the rest of the hexagons off. *faint*