Here’s the third of the Frankenpolishes that Alice Snow put under the Christmas tree for me. It’s a dusty green colour, that’s very difficult to describe. The polish also contains glitters in various colours – silver, blue and green.Its name is Misty Rain!

The formula was very thick, but the brush was good so it was easy to apply it evenly onto the nails. It covered perfectly in one coat only. Here it is with one layer of Seche Vite top coat: 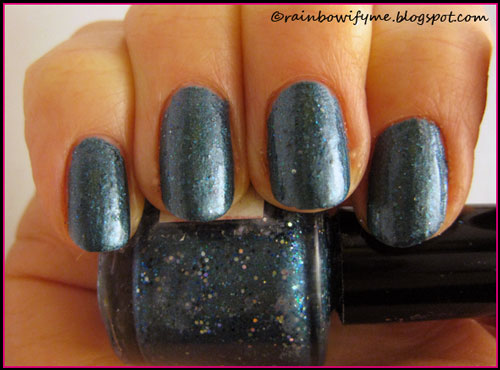 The glitter effect is not very prominent in this polish, in fact you have to look very closely to even see it. It’s not because it’s not there, it just doesn’t pop for some reason. The “invisible” glitter makes the mani bumpy – I applied two layers of Seche Vite top coat, and it still wasn’t smooth. I don’t mind that actually, it adds a bit of a 3D-effect to it. :D

I love the colour. It looks pretty ordinary in the bottle, but it looks so much better on the nails. It’s cool when polishes are like that, and so much better than if it was the other way around.