This polish has been sitting in my stash since my summer holiday, where I was in Germany. It’s not because I don’t like the colour that I haven’t used it before now. It’s simply because I made the mistake of putting it in my Helmer before I tried it. And you know how it is: Out of sight, out of mind. But today is the day!

Application of the first layer of polish was interesting. It got streaky and with lots of bald spots, even though I tried to be careful with application. I must admit that my heart sank a bit when I saw how awful it looked. When I applied the second coat, it evened it all out. Drying time was really good, also on the second layer. And even though this turned out to have a metallic finish, I didn’t have problems with brush strokes. 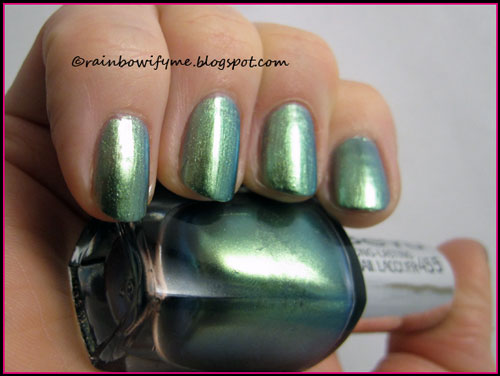 Then I sat and looked for it for a little while, not quite sure what I wanted to do with it. It’s to pale a colour for me to wear on its own, and it’s not my style anyway. After having gazed at it for half an hour I decided to go for stripes and glitter. I made two black stripes and one white stripe on one nail. I didn’t take a picture of this step, sorry.

I wanted to “cover the stripes up a bit” anyway. I applied two coats of OPI “Fresh Frog of Bel Air”, which is from the Muppet collection from Holiday 2011. 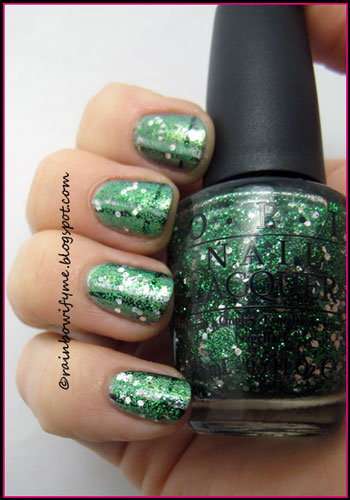 I am a huge fan of glitter, so it’s no surprise that I fell in love with all the glitters from this collection. I didn’t buy them when they got out though, since I consider myself to be a non-OPI fan, haha. But I had to surrender – so I bought them in blog sales instead. 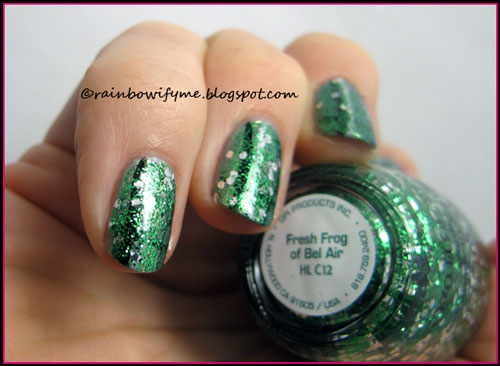 OPI dries insanely slowly on me, and so did this pretty green glitter. It felt like waited forever for each of the two layers to dry.

The final mani – with one coat of Seche Vite top coat to seal it all up. 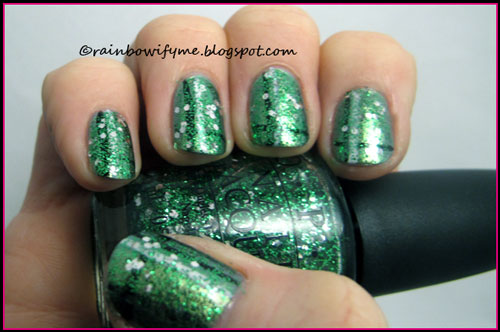 I really like the way the glitter makes the stripes less prominent, and I also like the darker tone that the Fresh Frog of Bel Air added to my mani. So what I thought might end up like a fail, actually ended up with something I accepted and liked for what it is.

But enough with the talking. What do you think of this? Does OPI also dry incredibly slowly on you?
Posted by Rainbowify Me at 9:28 AM