Let me introduce to you my two first (and only) Butter Londons. I’ve been considering trying them for a while, but wasn’t really willing to pay the relatively high price for them. I found these two babies cheap in a blog sale, so destiny has spoken: I was meant to own Butter Londons after all.

I started out with Dodby Barnett, which isn’t usually a colour I’d pick. I have got several silver holos already, and this isn’t the strongest example I’ve seen. The formula is good, it applies easily and dries relatively fast. The first layer is so sheer – I actually thought that it was a holo topcoat to begin with, so I googled swatches before adding the second layer to see what other bloggers had experienced. Most said that two coats would make it opaque, so I just added the second layer, and yes, it did get opaque! If I should wear this on its own, I would probably had added a third layer, but that wasn’t my intention with this mani. So here is a pic of two coats, no top coat: 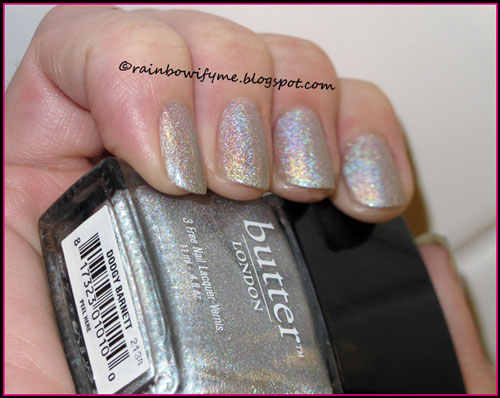 All the pictures are taken in my bathroom, and with flash. Today is a dull, grey and rainy day, and the bathroom seems to have the best conditions for taking holo pics when the sun isn’t shining :D 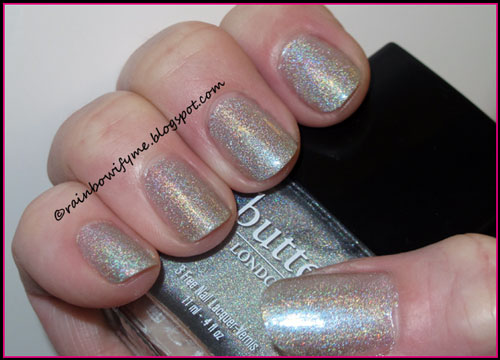 The holo is there, but it’s not very prominent, as you can see. I like this as a base for nail art though. So yes, I’ll probably keep this, and see if there are some of my other silvery holos that needs to find a better home :)

It’s been ages since I made a gradient! I made one today, with Dodgy Barnett and Bluey, and they’re so pretty together. I blended them together with a make up sponge, sealed the whole thing up with a layer of BK topcoat, et voilá, here’s the finished gradient: 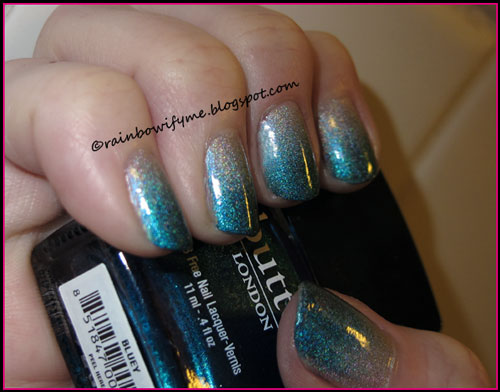 Let me show you a clearer picture, that shows the gradient better: 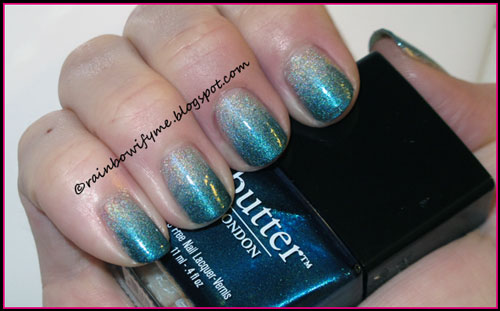 I am very pleased with this gradient, and am happy that I didn’t lose the hang of it even though it’s been such a long while. I seriously need to do gradients more often, because I really like the look of them! 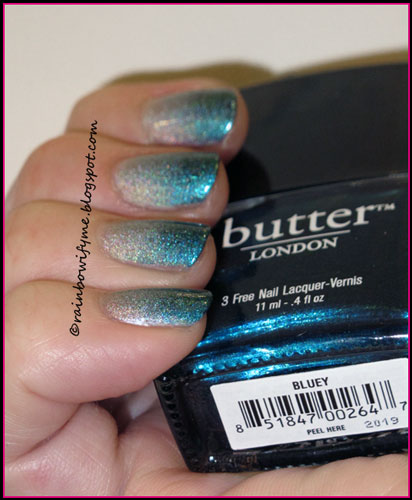 I decided not to add more nail art to it, and just enjoy it as it is. 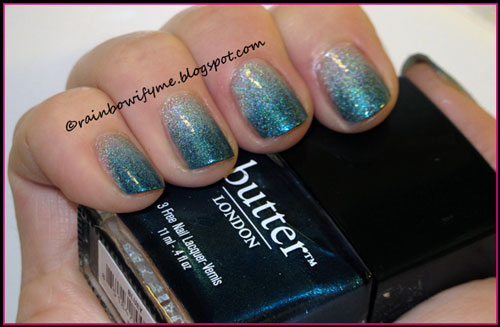 All in all I like my Butter Londons. The formula and drying time is great, coverage is good and they’re easy to work with. If I must mention a con or two, then it’s the price tag and the cap. I don’t like the cap! Take a look:

They’ve got a square cap that you pull off, leaving you with a silly little ridged handle to hold on to while you polish. I would have preferred to actually just hold on to the bigger, square cap. It may just be me, and it’s only a little thing, but it all adds to the experience one way or another, so I just thought I’d mention it.