You should all know by now that I’m a sucker for a good holo! I bought six of Treasure by Tan’s holos since I thought they looked really pretty on swatches.

Let me tell you right away that I was really disappointed in them. I applied the first coat and it looked absolutely horrible. The base colour isn’t very pigmented and it all went streaky and weird. I used my regular base coat – perhaps that was a mistake, I don’t know. I thought and hoped that the second coat would level it all out but it didn’t. It just looked even more streaky and horrible. I tried to figure out how many coats this would take to make it look reasonable. I think the correct answer is four or five, and I am just not that kind of girl! I wiped it all off again, and started over.

I applied one coat of Flormar #448 from their spring and summer collection 2012. It’s a vibrant purple that’s opaque in one coat. I didn’t take a picture of that step, since you can see it right here.

Then I applied two coats of Purple Nurble. The formula is alright, it dries relatively fast. The only downside as I see it is how sheer it is. Bummer!

Anyway – while I did all the wiping off and applying polish again, the sun disappeared behind a cloud, and refuse to come back out and play, argh!!

So these pictures are all taken under a light bulb, so you can see the pretty rainbows this polish has. 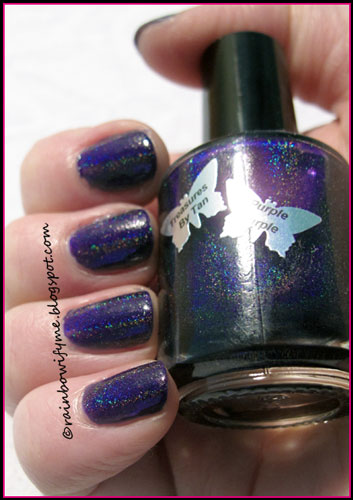 The colour is deep and the rainbows are really pretty. I don’t think I would have gotten this colour without the deep purple underwear though. But I’ll definitely try the next of my Treasures by Tan polishes, that’s for sure. I seriously hope that it’ll help! 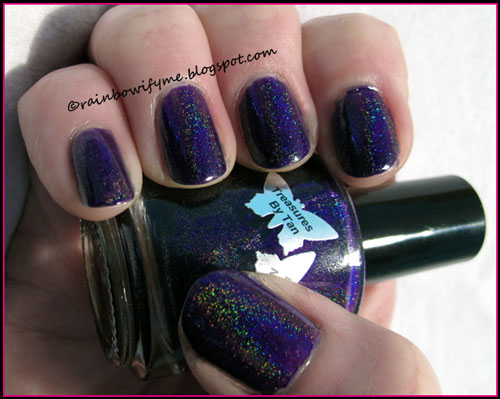 I really like that this polish is wearable in the shadow too. Lots of holos aren’t quite pretty enough for that, and it’s a waste because I spend more time in the shadows than I do in the sunshine! 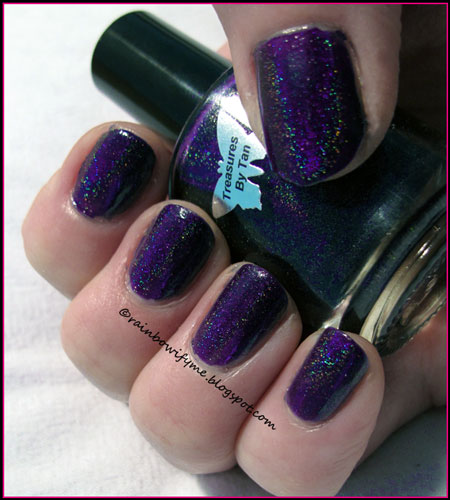 I must admit that I’m disappointed. I hoped that these polishes wouldn’t need any underwear! I hope that an aqua basecoat will solve at least a bit of the problem, even though I don’t really think so. I’ll give it a go anyway. I’ll decide whether these can stay or if they need new homes when I’ve tried all six of them!
What do you think? Would you keep it even though it needs underwear?