Today I'm wearing a really pretty topper from Claire's. It is a blue tinted base with blue microglitter. I decided to layer it over a really nice blue from Dark Blond called "243 Imperial Blue".

"Navy Pier" has a really odd formula. It looks really gloopy and thick in the bottle. It applies easily and evenly which was a surprise. The drying time was good.

Here's the final result including a layer of topcoat.

I love this colour scheme.

This is one layer of Claire's glitter "Navy Pier" over a blue base.

And here is the blue base: Dark Blond "Imperial Blue"; this is two easy coats.

Here are the polishes I used today. 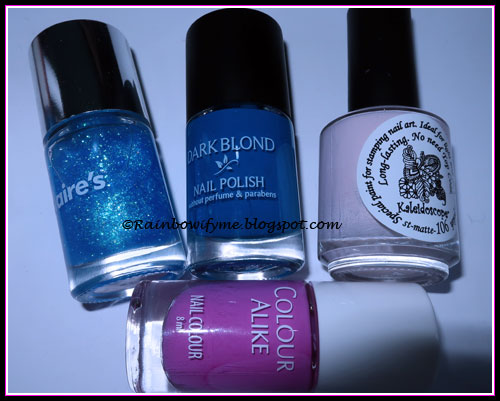 "Navy Pier" is a really pretty topper. The formula was a surprise though.