Femme Fatale ~ Edge of the Cosmos


Femme Fatale ~ Edge of the Cosmos
blackened purple base with fine holographic particles, and a variety of holo shapes and sizes

Here’s another polish I received in a scratch 'n dent box! It’s actually a polish that’s been on my wish list for a while, so I felt very, very lucky when I opened the envelope it was sent in and saw it.

I love stars on my nails. I like stickers, stamps and polishes with added stars to them. Edge of the Cosmos has got stars, and then much more than that: Moons, glitters in various sizes and holo particles. Imagine the cosmos as a big dark purple place – and right *there* is Edge of the Cosmos!

It’s a jelly, but I decided not to layer it. I wanted to see what it acted like on its own first. It’s relatively easy to apply, for a jelly. I didn’t fish for the hexagons, the stars or for any others of the glitters. I don’t do that, as you know. What you see on my nails is the result of what came up with the brush on its own.

I used three coats for the pictures. Two coats covered, but I know jellies – if you’re not sure whether two coats are enough, well, then they aren’t. So three coats is what I wear here, and a layer of Poshé topcoat. Drying time between coats is on the slow side...so I recommend putting on a good movie while you wait for it to dry.

Is is worth the wait then? Let me show you so you can judge for yourself first. three coats and one layer of Poshé topcoat: 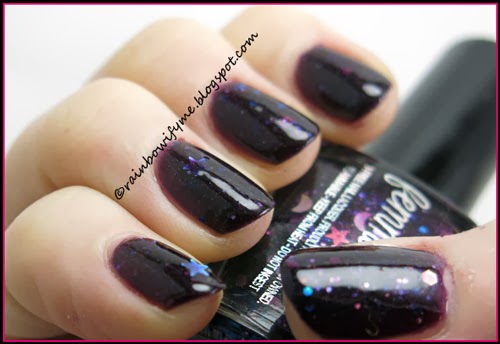 I got two stars on my pinkie and one on my ring finger! The moons didn’t come out and play at all, this time. 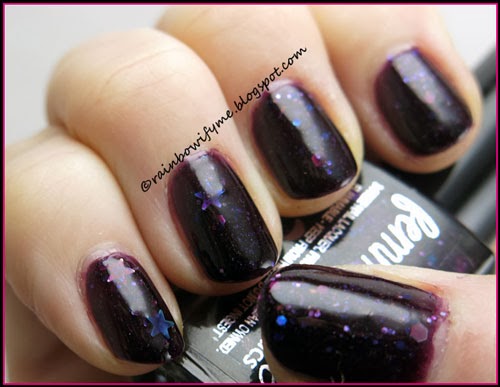 Let me show you what it looks like if I turn the flash on: 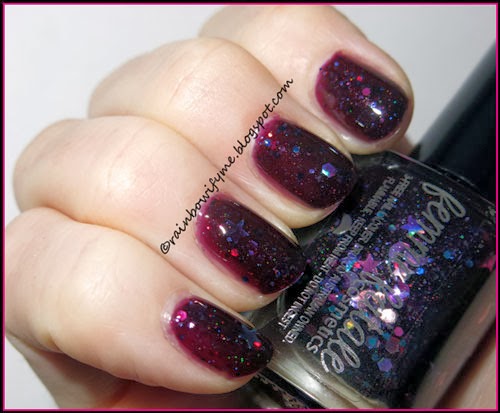 That makes the holo particles pop. Now it’s easy to see that the polish fits its name! Here’s a bottle shot that shows the stars, moons, hexes and even large circle glitter! 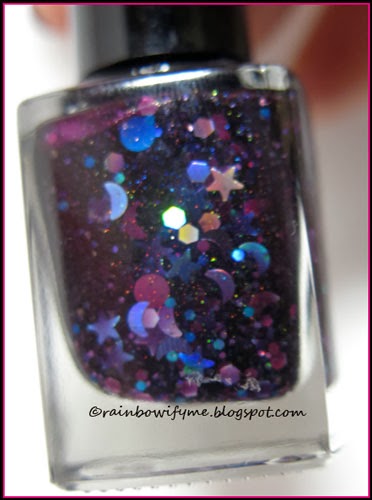 Do you think this polish was worth the extra effort? I think it was! I don’t think I’ll be wearing it like this again though – next time I’ll try and layer it over either a dark purple, or perhaps even over a midnight blue, to see what that looks like.

I never expected to find polishes like this in a scratch 'n dent box. The boxes that Norway Nails are selling consists of minimum 5 polishes and/or treatments. The polishes are in scratch 'n dent boxes because of a bad stick-on label, a leakage from another package, an opened bottle, a bad brush or something like that; something that means they won’t be suitable to be sold in the shop.

My Edge of the Cosmos missed its label on the bottom. I can easily live with that! I haven’t got a label on my bottom either – and I’m perfect!

You can buy Femme polishes from norwaynails.com just like I did, and they're on special today! You get 35% off if you buy them from Norway Nails - but only until the next offer is up, so I wouldn't wait too long if I was you!!
You can find more info on NorwayNail’s Facebook page, link here.
Norway Nails have kindly offered my readers a 10% discount code. Just use the code RAINBOWIFYME10 at checkout, and you'll be getting 10% off your purchase.
Posted by Rainbowify Me at 2:00 PM