This is a follow-up to the post I made yesterday, in which I tried China Glaze's "CG in the city". I wasn't impressed with that, not because the glitter wasn't pretty, but because the colour was a little bit "meh"...

Today I wanted to try the same polish, but with a darker colour underneath, to see if that changed my opinion about it. I chose another China Glaze polish, namely "Urban Nights" - both polishes are from the "Uptown Collection".

"Urban Nights" is a dark eggplant purple with a cream finish and I found it very difficult to work with. The formula was on the runny side, and it was hard to apply an even layer.

The colour itself is nice, although I prefer wilder colours, so this is bought with glitter and/or stamping in mind. Since I know from yesterday that the glitter in "CG in the City" is relatively intense, I only applied one layer of Urban Nights.

After waiting for a bit, I applied the glitter. Two generous coats, and then a layer of Seche Vite top coat. It looked like this: 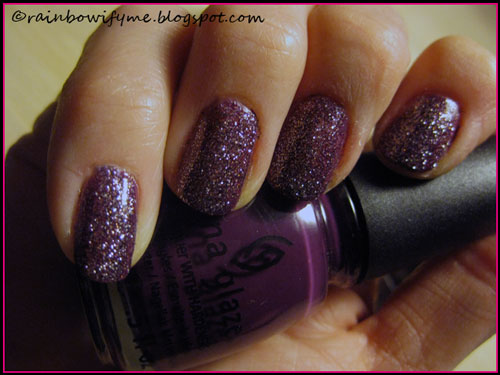 It's somewhat better than yesterday, but seriously: I'm still not impressed. I'm going to play around a bit with various colours underneath the glitter and see what we get.


And if everything else fails, I'll be using them both for Frankenpolishes! :D