I really like Orly's nail polishes, and Hawaiian Punch is no exception. It's bright pink, almost magenta, and the blue-ish shimmer makes it interesting, in my opinion. The formula is a bit to the runny side, but it's very easy to apply anyway. I had no streaks or bald spots whatsoever.

It took longer for the first coat to dry than I expected, and the second coat dried rather quickly. That's unusual. I would have expected it to be the other way around. Anyway - I forgot to take a picture before I went on to the stamping... it's because I was watching a movie while the polish was drying. :) 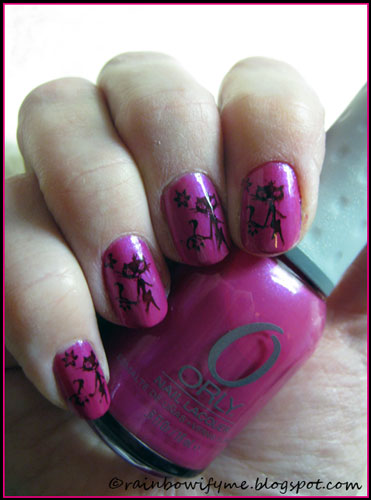 Anyway - I stamped on little pussycats from Konad's M83. I used a very dark burgundy stamping polish, also from Konad. That turned out almost black, for some reason. Here it is with a layer of Seche Vite.

After that I decided to try and add some shine and holo effect to it, so I applied a coat of KleanColor number 230, "Chunky Holo Fuschia" over it. It's a sheer pink base with holographic glitter added to it. You can pretty much add it to whatever colour you want, because the base is so sheer. 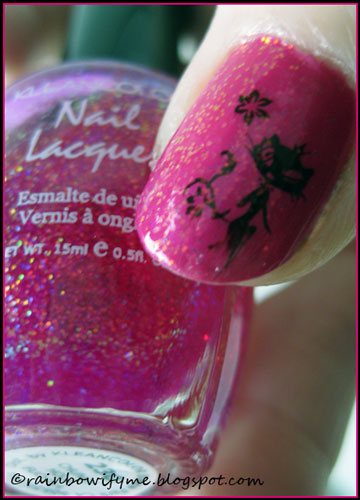 As you can see the cats are still visible, but the nail polish has a beautiful holographic shine to it. Really nice.

KleanColor doesn't work as a top coat for me though. It stays "sticky" for a very long time, as if it wouldn't dry properly. I gave it a  generous coat of Seche Vite to solve that little problem. An hour later when I moved some heavy stuff in the basement the nail polish got all wrinkly and ugly, apparently because the polish wasn't dry after all. Big thumbs down for that!