Rainbow Honey: The God Of Destiny

Rainbow Honey: The God Of Destiny
A mix of black, gold and silver holo glitter

I found two old untried Rainbow Honey polishes in my infamous box of untrieds recently. I can't remember when I bought them, but it's many, many years ago. That's what happens when you buy a lot of polish, and you receive some that don't wow you. These two polishes probably need to be rehomed, but you know the rule: No polishes leave the house without being at least tried on.

The first one of the two Rainbow Honeys is "The God Of Destiny". It's so packed with glitter that I actually thought it was a polish that would work on its own. It probably can work on its own, but I think it's meant to be a topper. I layered it over black, and I only applied one layer of glitter over the black base.

I stamped on it. I found some awesome floral/skull designs on the stamping plate "Mezerdoo D-09". I stamped with a regular white stamping polish from El Corazón.

This is the final design, including a layer of topcoat.


Same thing, also in the sun.

Here it is on its own over black.

And here are the things I used today. 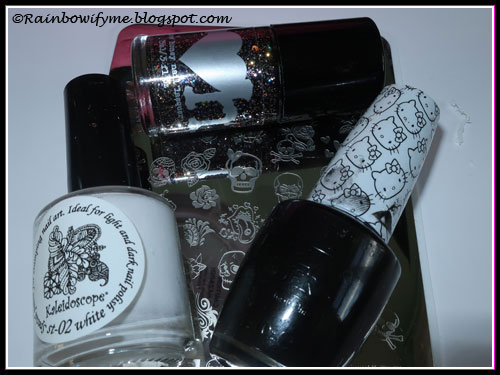 Hmm... I am not sure about this polish. I might keep it for a bit and try to use it for at least one more manicure, where I dap on the glitter.


Number of coats: 1 over a coloured base
Drying time: Good
Finish: Glitter bomb
Overall impression: I am not quite sure that this is me. Maybe over a brighter, happier colour
Buy again: No