I am a sucker for polishes in odd bottles and it isn’t a secret that skulls fascinate me, so Blackheart polishes in their skull bottles are just perfect for me.

I am not impressed by the formula though. It’s a bit on the runny side, which I absolutely hate, and it’s not easy to apply where you want it. That’s why the edges are a bit ragged on my pictures, haha. Bear with me! :)

I used two coats to make it all opaque and the drying time between the coats is average. It dries up super shiny, so I didn’t apply a topcoat for this picture: 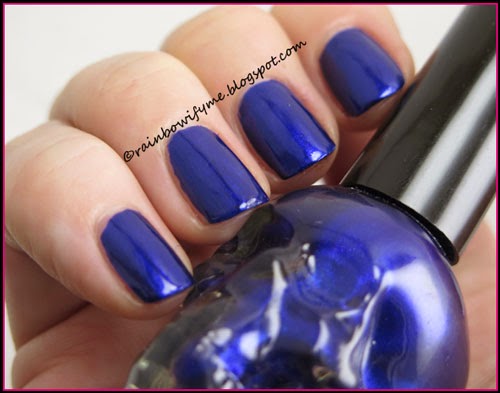 I added glitter. I used a blue glitter with silver hexes from DNA Italy. I can’t find a name on the bottle, so let’s just call it blue glitter. The glitter spreads out easily and evenly. It smells a bit odd and the drying time isn’t the fastest, but it looks good. Here’s one coat over the Blackheart: 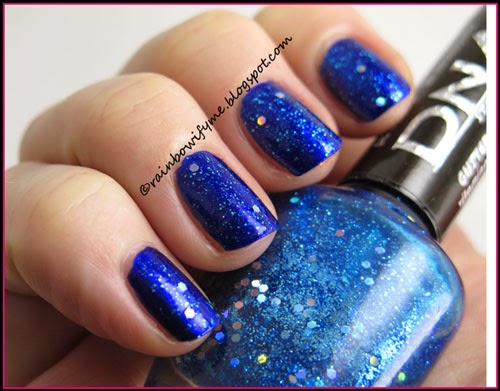 I wanted more colour! I made two half stripes on each nail with a striper from HITS called Pink. It looks a bit neon coral to me, but never mind. I think I got it in a grab bag from Ninja Polish when they still existed, and even though I really like HITS polishes as a rule, this striper isn’t good. This is the first time I’ve used it and it’s already gloopy, stringy and weird. It smells too :D
Anyway, two stripes on each nail and I went over it an extra time with the striper to make it nice and opaque over the dark blue. I added a layer of topcoat and then my mani was done: 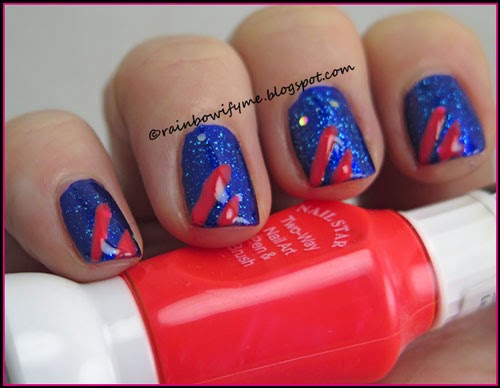 Blackheart ~ Navy
Number of coats: 2
Drying time: Average
Finish: Shimmer
Overall impression: Formula is runny, and not easy to paint with. Drying time could be faster. I like the colour though and I love the bottle!
Buy again: Yes
Posted by Rainbowify Me at 6:00 PM