Golden Rose Matte Velvet ~ 106
Dark magenta/red with shimmer, that dries up to a velvet surface

Alix Avien ~ 188
Clear base packed with pink and holo glitters

I received all of the three mentioned polishes in a swap with sweet Aylin from Posh Nail Art. I received so many pretties in one go, that I had a big problem deciding which ones to wear first, LOL!! So today I wear three in one go, wait and see!

First I applied two coats of Golden Rose holo number 116. It’s got a great formula and applies easily. I had no dragging and it covered very good for such a pale polish. Here is a pic of two coats – no top coat. 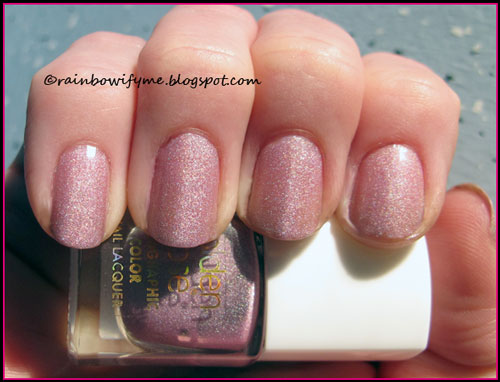 The pic is taken in the sun, but the holo effect is not very prominent.

I couldn’t wear this polish on its own because it’s too close to my natural skin tone, so I grabbed the next polish up, Golden Rose Matte velvet number 106, which is a very rich magenta polish that covers perfectly in one coat. The formula is great, and even though I’m not that into matte polishes, I must say that this polish impressed me. I’ll definitely write some more of them on my wish list for my next swap with Aylin.

I taped my nails with masking tape that I cut with scrapbooking scissors to make the curves. And then I painted one coat of the Matte over the holo.

Here’s that step – still in the sunshine. 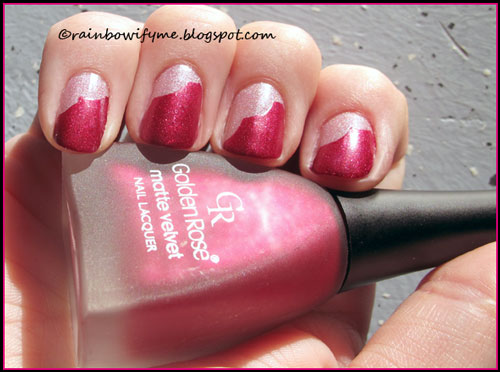 That’s much better. I love the pang effect of this polish!

I wasn’t quite satisfied with the curves that the scissors made. And we all know: If everything else fails, use glitter! So I sponged the line between the two polishes with Alix Avien number 188, which is a pale pink holographic glitter. That helped! After applying a generous coat of Seche Vite, my mani was finally done: 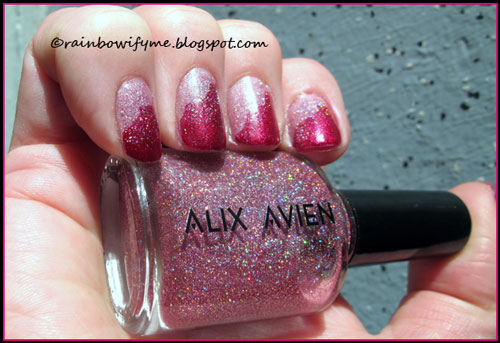 And here are the pretty polishes involved: