Femme Fatale ~ A Frosty Shake
Clear base with diamond sparks and iridescent squares, white glitter in various shapes and sizes and a splash of teal

I believe that “A Frosty Shake” is meant to be layered over a pastel, but I am really not that much into pastels. I tried over a teal first, but then the pretty teal glitter drowned, so I ended up deciding to layer it over a plain black crème. That way you also get to see how much there’s really going on in this polish.

The polish seemed a bit lumpy when I pulled up the brush, so I gave it a good shake before using it and that helped. It’s packed with various glitters, so it’s quite dense even though it isn’t meant to be worn alone.

I’ve got one coat of Poshé top coat over to seal up the pretty glitter. 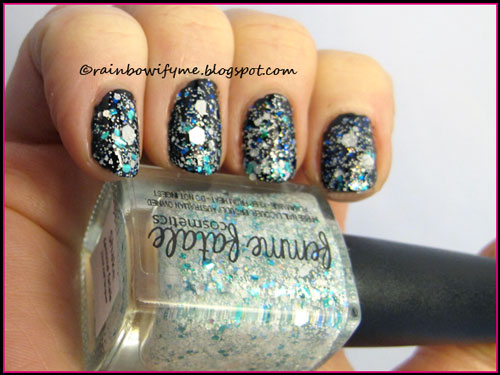 The glitter spread out evenly, and I didn’t have to fish for the big white hexagons, which is a huge plus. 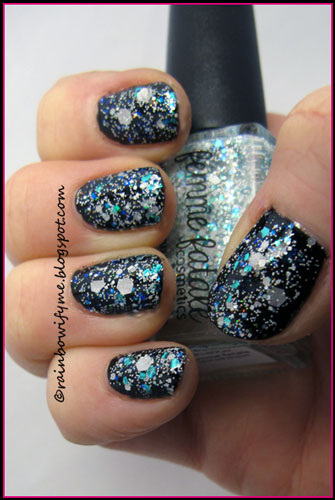 Drying time is great, no problems in that department either. 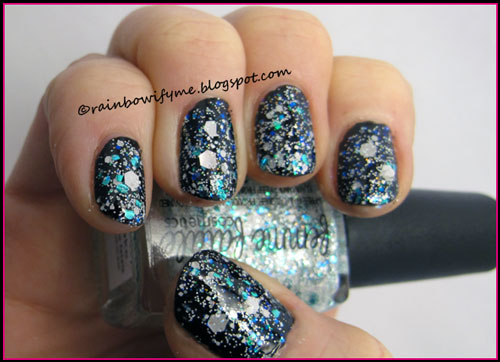 There’s only one thing that bothers my eye with this, and that’s the text on the bottle. It’s written from top to bottom. Most brands write their text so that it reads from the base up to the lid, but this one is written so that it reads from the lid down to the base. That means I have to point it in the opposite direction when I take pictures of it. I know it's a small thing, but I don’t like it. 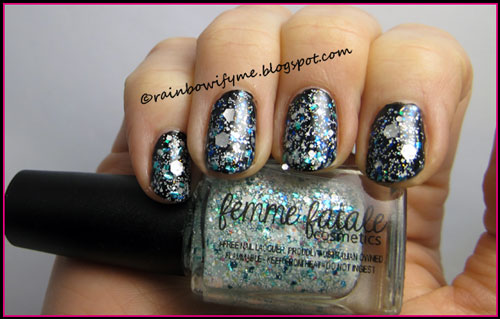 Yes, this polish is a win in my book!